The sublime Japanese artist Yasui Sotaro (1888-1955) lived during a time of momentous changes. He witnessed the dynamics of a new Japan that emerged after the Meiji Restoration of 1868 that erased much of the Edo era. On top of this, the new hopes and dreams of modernity would soon be caught up in nationalist fervor. Therefore, the 1930s in Japan must have been a dream world away from the thought patterns that were impacting on Yasui Sotaro during his informative years. However, despite the continuing changing sands in Japan, for example from the ashes of war to a new phoenix starting to show signs of rising just before his death in 1955, it is clear that art always remained embedded within his soul.

Art pieces that are widely acclaimed by Yasui Sotaro include Black-haired Woman, Portrait of a Woman, Early Summer, Autumn at Lake Towada, A Suburb of Kyoto, Girl in New-Year Clothes, Roses and Chin-Jung. In all these stunning pieces of art you can feel the unique qualities of this sublime artist who was born in Kyoto.

Indeed, it is intriguing that Western Style portraits by Yasui Sotaro really became important to this exquisite artist. After all, with being born in Kyoto then one can easily imagine the richness of this cultural city on the mindset of Yasui Sotaro. Likewise, with Nara and Koyasan, and other places that are blessed with rich culture being so close to Kyoto, then his love of Western style art is really intriguing.

In another article I comment: “He was very fortunate to have studied under Asai Chu who sadly died in 1907 when he was still a teenager. Asai Chu was a stunning Japanese painter who inspired many artists in Japan. This notably applies to Yasui Sotaro, Suda Kunitaro, Umehara Ryuzaburo – and other artists – who were inspired by Asai Chu.”

The impact of this artist upon Yasui Sotaro during his informative years must have been extremely powerful even if the independent streak within his soul remained strong. Similarly, in France he studied under Jean-Paul Laurens at the highly acclaimed Academie Julian. Therefore, these two amazing teachers provided a rich area of grace within the art he produced in this period of his life.

Kyoto must have appeared a million miles apart from Paris despite both cities being blessed with rich cultures. Also, the romantic side of Paris – and the alien culture in this city – must have created a fresh momentum within the art of Yasui Sotaro. Given this reality, his time in Paris between 1907 and 1914 was most rewarding and this can be seen by the art he produced in relation to his development under Jean-Paul Laurens.

The Buddhist temples of Kyoto and beautiful Japanese gardens must have impacted on the childhood of Yasui Sotaro. This cultural impact rendered his parents wishes to become null and void because they wanted their son to enter the commercial world. However, he knew at a young age that art was embedded deeply with his soul. Also, the richness of the environment of Kyoto remained within his psyche irrespective if he was living in France or in other parts of Japan.

It is known that Yasui Sotaro adored the amazing art of Paul Cezanne. Likewise, he respected Jean-Francois Millet and Pierre Auguste Renoir. Yet, sadly for Yasui Sotaro, the outbreak of World War One meant that he had no option but to return to the land of the rising sun.

I comment in another article that: “The following decade witnessed recurring problems related to the health of Yasui Sotaro. However, from an artistic point of view it was still a time of further growth. Also, in this period he focused on vibrant colors and outlines that were clear. Therefore, you can notice his style within the landscapes and portraits that he produced to great aplomb. Also, traditional Nihonga techniques fused naturally with realism and other thought patterns that he studied in France.” 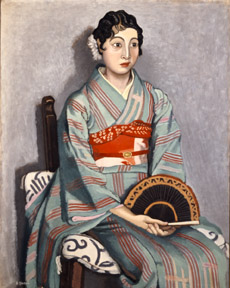 Overall, the legacy of Yasui Sotaro is extremely rich because he produced many sublime pieces of art. Also, he could naturally bridge the worlds of Kyoto, Paris and Tokyo – and other areas – and then utilize all new concepts that enabled him to grow.