Shia Persecution: Remembering the Execution of Sheikh al-Nimr by the State Apparatus of Saudi Arabia

Shia Persecution: Remembering the Execution of Sheikh al-Nimr by the State Apparatus of Saudi Arabia 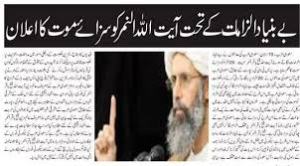 The holy Shia cleric named Sheikh Nimr Baqr al-Nimr (Sheikh Nimr Baqir al-Namir) was brutally killed by the state of Saudi Arabia earlier this year. It is known that a further 46 people were also executed at the same time in the kingdom of institutional hatred. After all, Saudi Arabia is a nation that bans all non-Muslim holy places of worship and the Shia minority suffers from systematic discrimination. However, it is the brutal murder of the holy Shia cleric that continues to reverberate throughout parts of the Middle East and much further afield.

Hossein Jaber Ansari, the spokesperson for the Foreign Ministry of Iran, rightly condemned the brutal execution of Sheikh al-Nimr. He stated strongly “The Saudi government supports terrorist movements and extremists, but confronts domestic critics with oppression and execution… The Saudi government will pay a high price for following these policies.”

Sheikh al-Nimr, a pious and dedicated holy Shia cleric, hit a chord with Shia Muslims in the Eastern Province of Saudi Arabia and in other parts of this nation. The BBC reports “He was a prominent, outspoken cleric who articulated the feelings of those in Saudi Arabia’s Shia minority who feel marginalized and discriminated against.”

America, a staunch ally of Saudi Arabia, is worried about the sectarian angle being further inflamed and the same applies to the crisis in Bahrain. John Kirby, a spokesperson for the U.S. State Department, referred to this reality. He stated, “We are particularly concerned that the execution of (al-Nimr) risks exacerbating sectarian tensions at a time when they urgently need to be reduced.”

However, it appears that Saudi Arabia is upping the ante when it comes to sectarianism. This reality can be seen internationally in Bahrain, Syria, and Yemen. Similarly, the Shia feel alienated throughout Saudi Arabia and this notably applies to the Eastern Province. Therefore, the timing – and reasons behind the execution of Sheikh al-Nimr – will further inflame the situation internally and in other parts of the Middle East because the brutal Sunni Takfiri agenda is inflaming the religious fault-lines.

The execution of Sheikh al-Nimr is a brutal stain against all nations that continue to openly trade with Saudi Arabia because these nations are ignoring the horrendous human rights record of this nation. His death may have happened in early January this year but to his followers – and the Shia throughout the region – it was like it happened today.

In other words, the martyrdom of Sheikh al-Nimr remains vivid irrespective of each passing day, week, month, or in years to come. His death cries for justice and for the Shia to be free from the shackles of the anti-Shia state apparatus of Saudi Arabia.