The Japanese poet Yamabe no Akahito belongs to the Nara period of history in the eighth century. In truth, much remains unknown about the life of Yamabe apart from the rich poetic legacy he bestowed on future generations. Therefore, the Yamabe that is attainable can only come from the poetry he wrote.

His fifty surviving exquisite poems written between 724-736 enabled this poet to become one of the Thirty-six Poetry Immortals. These poems were written in the Manyoshu – an ancient anthology – that contain his sublime work. Of the fifty poems, thirteen are choka (long poems) and the other thirty-seven are tanka (short poems).

Yamabe in one poem writes:

I STARTED off along the shore,
The seashore at Tago,
And saw the white and glistening peak
Of Fuji all aglow
Through falling flakes of snow. 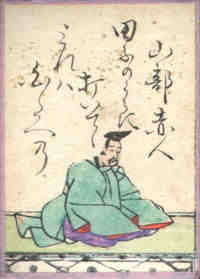 In another poem, Yamabe writes:

To my good friend
Would I show, I thought,
The plum blossoms,
Now lost to sight
Amid the falling snow.

It is stipulated that Yamabe composed many poems while traveling with Emperor Shomu. This in itself shows how highly cherished he was during his lifetime. Therefore, after leaving this world Yamabe became a blessed kami of poetry.

Some Japanese articles by Modern Tokyo Times are republished to highlight the unique reality of Japan to our growing international readership. Also, this article was selected by members to be republished.