The Russian Federation thanks America for preventing a terrorist attack: CIA and possible thaw? 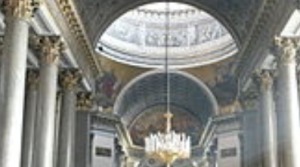 President Vladimir Putin of the Russian Federation thanked President Donald Trump of the United States by telephone after it became known that the CIA helped to stop a planned terrorist attack against a famous Christian cathedral in St Petersburg. It is hoped that this rare positive note in stopping Sunni Islamist terrorists from killing innocent people will pave the way for a genuine thaw between both nations.

In order for this to happen the politically correct media circus in America and the anti-Russian Federation politicians must be contained by “real issues” and raising genuine concerns. If this happens, then hopefully America and the Russian Federation can forge a close relationship because many strategic parts of the world remain unstable. Hence, with the CIA helping the security services of the Russian Federation in preventing a major terrorist attack – and with other targets being in the pipeline – then hopefully this spirit of friendship and concern will blossom into friendly ties.

One can only imagine the terrible consequences of a Sunni Islamist terrorist attack against Kazansky Cathedral in St Petersburg. This not only applies to the huge loss of life but inciting sectarianism in parts of the Russian Federation. Therefore, the people of the Russian Federation are thankful for the role played by the CIA in preventing such a brutal terrorist attack.

The Kremlin reported, “The Russian President thanked his American colleague for the information passed on by the Central Intelligence Agency, which helped detain a group of terrorists preparing explosions in St Petersburg’s Kazansky Cathedral and other busy sites in the city.”

According to media sources in the Russian Federation, it is known that the Federal Security Services immediately responded to information provided by the CIA. Hence, Sunni Islamists linked to ISIS (Islamic State – IS) were tracked down and detained.

Reuters reports, “The Russian leader has said restoring ties between Moscow and Washington is vital because the two countries need to work together to counter global challenges, in particular the threat from violent Islamist radicals.”

Overall, it is hoped that America and the Russian Federation can build on stemming the diabolically planned terrorist attack. If so, then a new chapter can be written based on friendship and greater understanding – even when major geopolitical differences exist.