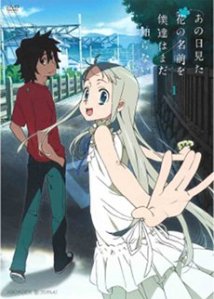 Japanese animation is rich and varied and Ano Hi Mita Hana no Namae o Bokutachi wa Mada Shiranai (We Still Don’t Know the Name of the Flower We Saw That Day) is full of mystery because the storyline is very emotional. Also, the main characters are a mixed bag of individuals. Therefore, Tatsuyuki Nagai, the director, is clearly creative and the series shows you the development of each character and is based on a tragic event which took place during their childhood.

It is about the closeness of six children who have strong bonds until the tragic death of one of the children called Meiko “Menma” Honma.  After this event they drift apart and Jinta Yadomi desires to shut the world out.

Therefore, Jinta Yadomi begins to develop hikikomori symptons because he is very reclusive and the future looks grim because he is trapped by the past.  However, one day during the hot summer an individual called Menma appears and after this things begin to change because Menma resembles an adult Meiko if she had lived.

Jinta is the main male character because before the tragedy struck he was full of life and the leader of the Super Peace Busters.  However, the death of Meiko and his mother changes everything and his world becomes based on staying at home, sleeping, withdrawing himself from society and playing video games.

It is also apparent that Jinta had deep feelings for Meiko despite suppressing his feelings when they were children.

Menma becomes a turning point because when she appears in his life he starts to come out of his shell.  However, rather than seeing Menma to be a ghost he believes that Menma is a reality of his stress. Therefore, Jinta starts to re-connect with people whom he once held so dearly in his life.

The main female in the series is clearly Meiko Honma and she is of mixed blood but despite knowing clearly about her death her thinking is different.  For instead of feeling bleak and full of morose she is very outgoing when she re-connects with Jinta.

Meiko cherishes her memories and holds them dearly unlike Jinta who collapsed internally and withdrew from society.  This paradox also makes the series tick because it is full of emotion and focuses on real life issues and how they alter people differently.

Despite aging naturally it is clear that Meiko uses language which is caught up with the time of her death.  Meiko still retains the same dress that she had on the fatal day which took her life.

Only Jinta can see Meiko but in the series her nickname is used and Menma (Meiko) does at times feel sad, despite trying to hide this from Jinta.  This applies to the fact that her friends and family can‘t visually see Meiko.

However, Meiko can interact in the world because she can play video games, cook, eat, and so forth.  Also, people can feel something even if they don’t understand what it is and later in the series this theme is developed. Therefore, others begin to understand when Meiko writes in her dairy and makes a noise after deliberately dropping it on the floor in order to get their attention.

Naruko is also a very interesting character because she hides her true feelings and concerns for Jinta.  Also, her feelings for Meiko are complex because on the one hand she admired her but on the other hand she was jealous.

In truth, every character is different and fascinating and they have all reacted to their childhood in different ways.

If you really like animation that is based on real emotions then Ano Hi Mita Hana no Namae o Bokutachi wa Mada Shiranai will appeal greatly to you.

Also, if you are on the border line where only famous animation like Spirited Away is part of your knowledge; then Ano Hi Mita no Namae o Bokutachi wa Mada Shiranai will appeal to you.

It is very rewarding to watch and full of emotion.

Some articles about Japanese art and culture by Modern Tokyo Times are republished based on the need to highlight the unique reality of Japan to our international readership.