Turkey Suffering because of Internal and External Policies of Erdogan and Davutoglu: Kurds and Socialists 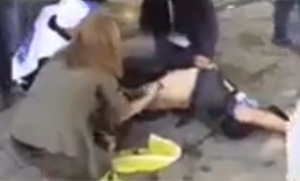 Turkey is reeling from another barbaric terrorist attack that is aimed at shackling all progressive Turkish and Kurdish forces in this nation. In Pakistan, this nation destabilized itself because of supporting sectarian Islamist forces in Afghanistan and now Turkey is facing similar demons because of barbaric intrigues against Syria. This brutal reality is based on the intrigues of President Erdogan and Prime Minister Davutoglu who continue with their anti-Syria destabilization policies. At the same time, these two individuals have focused on bombing the PKK in recent months and once more this is proving detrimental. Therefore, the barbaric twin attack in Ankara is a reminder of the changed internal and external environment that the ruling party helped to create in modern day Turkey.

It is understood that the current death toll in Ankara is 95 and sadly this number may increase because many people have been injured. Initially, individuals had gathered prior to the rally in order to call for peace between the PKK and the government of Turkey. Indeed, just before the twin attack socialists, Kurds and others were singing and showing unity. Then suddenly death and mayhem befell innocents in such a brutal fashion.

The BBC reports: “The pro-Kurdish HDP party was among those attending, and it said in a statement that it believes its members were the main target of the bombings… HDP leader Selahettin Demirtas has blamed the state for the attack and has cancelled all election rallies. Mr Demirtas angrily condemned the government as “murderers” and said it had blood on its hands…”

Irrespective of empty words by Erdogan and Davutoglu immediate images of the terrorist attack highlights the divisive nature of modern day Turkey. This applies to Turkish police officers using tear gas near the scene while people were fighting for survival. In others words, the complete lack of trust in state institutions was on full display. Similarly, hatred of the state apparatus in the other direction is reminiscent of the new Turkey under Erdogan and Davutoglu.

Today’s Zaman reports “Selahattin Demirtaş, co-chairman of the pro-Kurdish Peoples’ Democratic Party (HDP), lambasted the government after the attack, saying it was an “attack by the state on the people,” and saying that world leaders should not send messages of condolences to the president or the prime minister for the deaths.”

In another recent terrorist attack aimed at socialists and Kurds in Suruç the Modern Tokyo Times reported “Socialist youths met in Suruç full of life, ambition, solidarity, and with enormous compassion, in order to lay the foundation of assisting Kurds in Kobane. These individuals of compassion and love desired to show “the beautiful face of humanity,” compared with the darkness of ISIS and the brutal intrigues of Erdogan and Davutoglu. After all, ISIS had laid siege to Kobane in the past and killed untold numbers of Kurds in full view of the armed forces of Turkey. Therefore, youths in Turkey imbued with the passion of socialism desired to help the Kurds of Kobane based on the bonds of humanity.”

The terrorist attacks in Ankara and Suruç show the full light of Turkey where Kurds and Turks seek peace and compassion. Yet, the same terrorist attacks show the utter darkness that is eating away at modern day Turkey. This darkness based on division, hatred, nationalism, Islamism – and the need to preserve power – is being ushered in by the internal and external intrigues of Erdogan and Davutoglu.

Turkey is now on the path of self-styling itself on Pakistan and this applies to gradual Islamization, increasing terrorism, foreign intrigues, greater divisions within society and shackling independent voices. Therefore, in modern day Turkey the other – be they socialists, secularists, Kurds, Alevis and so forth – face further marginalization and sinister intrigues based on the polices of Erdogan and Davutoglu.