Islamists Slaughter at least 120 people in Paris: France on the Wrong Side of History in Libya and Syria 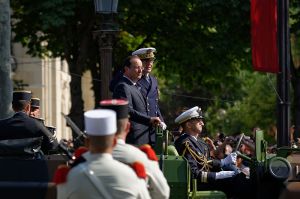 The last two political leaders in France supported intrigues against Libya and Syria that have clearly boosted various Sunni Islamist groups. At the same time, parallel Islamist areas in France, just like other major European countries like Germany and the United Kingdom, have been allowed to grow and grow under successive political leaders. This reality means that while Sunni Islamist ideology is growing in Europe based on Gulf petrodollars and Salafi ideology, the opposite is happening in the Middle East because Christian populations are being cleansed in several nations. At the same time, Muslim diversity is being crushed in both the Middle East and Europe because Sunni Islamists and Salafi ideology seeks to crush all alternative thought patterns. Therefore, the latest Islamist attack in France isn’t a surprise despite the utter barbarity of the crime.

France 24 (with AFP and Reuters) reports “At least 120 people were killed in a wave of simultaneous attacks on Friday evening in Paris, in the deadliest violence to strike France since World War II.”

The BBC states “The deadliest attack appears to have targeted the Bataclan concert hall, with unconfirmed reports saying that some concert-goers were shot after being taken hostage. Police sources told AFP news agency that at least 100 people had died there.”

It is known that Islamist terrorist bombers and individuals with guns attacked a concert hall, bars and restaurants in various locations around the environment of Paris. This is happening at a time when nations like France and Germany are pressurizing nations like the Czech Republic and Hungary – and all of Europe, to open up the floodgates for mainly male economic migrants. Sadly, genuine refugees are being lost within the madness and like usual the answer of Saudi Arabia is to build more Sunni Islamist mosques in Germany. Of course, this may appear to be a side issue, but for individuals that are silenced by so-called democratic elites it is a genuine issue based on fear and the loss of indigenous culture.

President Bashar al-Assad in Syria warned Gulf and NATO states that are utilizing various sectarian terrorist groups, that this is pure folly. After all, in Afghanistan in the 1980s and early 1990s nations like America, China, Pakistan, Saudi Arabia and the United Kingdom all played the Sunni Islamist terrorist card in order to destabilize the Soviet Union. The result of this enabled al-Qaeda and the Taleban to rise in power and influence. However, even today Pakistan is still playing this dangerous game against Afghanistan and India. Of course, blowback resulted with September 11 for America, while in China the Islamist threat is growing in Xinjiang based on the ratlines emanating within Afghanistan and parts of Pakistan (Pakistan is an ally of America, China, Saudi Arabia and the United Kingdom).

Despite the obvious reality of what happened in Afghanistan and Iraq after outside meddling, the same players involved themselves in destabilizing Libya and Syria. In Libya, the overthrow of Gaddafi was based on NATO air-power, al-Qaeda operatives on the ground and an array of different militias. The end result being a failed state and the growing rise of al-Qaeda affiliates and ISIS (Islamic State – IS). This reality means that Christians are beheaded on beaches by Sunni Islamist Takfiris in Libya and the people of this nation have no future under the prevailing conditions. Also, regional nations like Egypt and Tunisia are being put in jeopardy because of the growing Islamist menace and mass immigration is also entering the fray. All this is based on the self induced reality of Gulf and NATO powers that destabilize and leave behind powerful vacuums for Sunni Islamist ideology and terrorist groups to exploit.

In Syria, the mainly Muslim armed forces of this nation are fighting for a Syria where Alawites, Christians, Druze, Shia and Sunni can all preserve their religious and cultural identities. However, nations like Qatar, NATO Turkey and Saudi Arabia support various Sunni Islamist sectarian factions. These Islamist terrorist factions are cleansing religious minorities like the Alawites and Christians in Syria. Like usual, the nations of America, France and the United Kingdom are in bed with Qatar, Turkey and Saudi Arabia. Indeed, the Saudi Arabia led coalition – that is supported by regional and Western powers – is now massacring Shia Houthis and bombing all of Yemen while continuing to destabilize Syria. Therefore, just like ISIS and various al-Qaeda affiliates have been boosted in Iraq, Libya and Syria based on destabilization policies – the same is now happening in Yemen. In other words, the ongoing madness is merely spreading to other nations and not surprisingly vast numbers of refugees are fleeing this mayhem and carnage.

If liberal political elites in Europe keep on allowing Sunni Islamist parallel areas to grow and prosper in major cities – and for untold numbers of economic migrants to alter the European landscape so quickly – then obvious vacuums will occur given the prowess of Gulf petrodollars and Sunni Islamist ideology. This reality especially applies given the liberal policies of appeasement. At the same time, major Gulf and NATO powers are continuously destabilizing nations with the upshot being failed states and the growth of Sunni Islamist terrorist groups, including al-Qaeda affiliates and ISIS. On top of this, mass destabilization is leading to vast numbers of refugees and utter desperation for religious minorities including Alawites (Syria) Christians, Yazidis (Iraq) and Shabaks (Iraq). Therefore, events in Afghanistan, Iraq, Libya and Syria are all tied with terrorist convulsions that hit nations far and wide.

Given this sad reality, the people of France should consider the role of this nation in Libya and Syria in recent times, while also focusing on other serious issues, for example the allowance of parallel Islamist areas to grow.