Artists in old Japan highlight the power and influence of China. At the same time, the uniqueness of Japanese culture also shines through because of specific elements that existed and influenced artists. In modern Japan the richness of Tensho Shubun is rightly acknowledged – the same applies to international lovers of art. Therefore, the importance of Tensho Shubun remains within Japanese high culture.

During the lifetime of Tensho Shubun, he maintained the rich bridge that linked China and Japan. If only modern day political leaders focused on this long golden period between The Middle Kingdom and The Land of the Rising Sun. At the same time, this adorable artist also helped to bridge the generation differences in relation to up and coming artists. 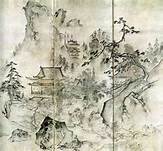 In another article by Modern Tokyo Times, it was stated “It is known that Tensho Shubun was born in the province of Omi in the late 14th century and died in the middle of the following century. Not surprisingly, the richness of Japanese Zen Buddhism and the splendor of Kyoto and Nara in Japan played a powerful role within his art. Likewise, the power of China in this period certainly emboldened Tensho Shubun. Therefore, it is widely credited to Tensho Shubun that he is the founding father of bringing suiboku ink painting to the fore in Japan based on the rich style of China where this form emanates.”

Internationally Kyoto is deemed to be the place where Japanese high culture reached new heights. However, this isn’t correct, the real flourishing of high culture is based on the rich cultural legacy of Nara. Of course, other amazing places exist including Kamakura, Koyasan, and Nikko.  Yet Nara is the real cradle in the land of the rising sun. Likewise, often it is perceived that China and Japan have a legacy of animosity but this couldn’t be further from the truth. After all, prior to Western colonial encroachment that inspired the Meiji Restoration of 1868, then China and Japan had nothing to fear from either country. Indeed, even when Japan closed itself from most of the world during the Edo period, it is still abundantly clear that the rich legacy of Chinese culture remained powerful even if hindered by overwhelming international isolation.

The same article stresses “Individuals often eulogize his teacher Taiko Josetsu and the same applies to Sesshu Toyo who was a pupil of Tensho Shubun when he was a boy. Of course, both individuals are widely acclaimed because of their rich talents. Yet Tensho Shubun shouldn’t be overlooked because he was a bridge between these two powerful individuals and he rightly left his own mark.”

Indeed, the famous Sesshu Toyo was a very fortunate individual because he studied for a set period under Tensho Shubun. One can only wonder how much the teaching of Tensho Shubun played in formulating ideas, knowledge, and wisdom, within the heart of Sesshu Toyo. Also, the bridge linking both artists is further evidence that Tensho Shubun was a pivotal individual in this period and he maintained to be after his death. This is based on the richness of his art and the ideas he formulated in relation to China.

I stated in the past that: “Alongside Tensho Shubun being inspired by suiboku ink painting emanating from China, he also adored Chinese landscape artists including Xia Gui and Ma Yuan. The influence of China was enormous even if many individual Japanese traits would emerge based on different cultural concepts. Indeed, Taiko Josetsu was an immigrant from China and mainstream Japanese artists in this period adored the richness of paintings from the Song Dynasty.”

The richness of Confucianism and Daoism from The Middle Kingdom inspired Japanese high culture greatly. Similarly, Buddhism enabled a brotherly bond between China, Japan, and Korea. This brotherly bond filtered through and inspired artists in Japan and the same applies to culture, literature, thinking and so forth. At the same time, the richness of Japanese culture in relation to Zen Buddhism and various other sects – along with the indigenous Shinto faith – highlights the flourishing reality of a powerful culture within the psyche of Japan based on a multitude of different concepts. Not surprisingly, all these traits influenced the corridors of power in Japan to various degrees.

Tensho Shubun understood the richness of The Middle Kingdom that inspired many areas of culture within The Land of the Rising Sun. Naturally, he fused this knowledge with the adorable splendor of indigenous culture in relation to Shintoism and various indigenous Buddhist sects, that emerged once this faith reached Japan. Therefore, Tensho Shubun understood the power of both worlds while at the same time influencing the next generation to come.

Some art and cultural articles by Modern Tokyo Times are republished based on our growing international readership and the need to highlight the unique reality of Japan.