Trump’s America Focused on Helping US Workers: Japan Urged to Change at WTO 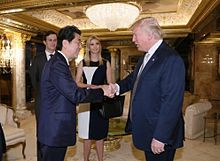 President Donald Trump of America was elected on the premise of helping American workers and boosting companies that face unfair obstacles in trade. This reality was behind the urging of Japan to open up certain economic areas. Therefore, despite the smiles of Prime Minister Shinzo Abe of Japan during his last meeting with Trump, it is clear that Trump is determined to follow through on his promises to the American electorate.

Of course, in terms of geopolitics and military angles related to China, the Korean Peninsula, the Russian Federation, and the Asia Pacific in general, then obviously Japan remains a pivotal nation for the grand designs of America. Yet, despite this, the feeling of business injustice in America over many decades aimed at nations like Japan, and more recently China, means that Trump seeks a new approach.

At the World Trade Organization (WTO) in the middle of this week, the Trump administration clarified in a new determined fashion that change is needed in the corridors of power in Tokyo. For now, this notably applies to the auto sector and agriculture – but these areas are most likely the start of a wider approach by the Trump administration.

A spokesperson for the government of America at the WTO said, “In particular, the United States has expressed strong concerns for years about the overall lack of access to Japan’s automotive market for U.S. automotive companies, due to non-tariff barriers.”

The statement continued, “The United States urges Japan to remove non-tariff barriers that impede U.S. manufacturers’ ability to compete on a level playing field with their Japanese competitors, both in the area of automobiles and beyond.”

Of significance, prior to the meeting between the American Vice President Mike Pence and the Japanese Deputy Prime Minister Taro Aso, is the single word “beyond.” Hence, the new Trump administration is letting it be known that this is the opening gambit that seeks real change in nations like China and Japan.

The spokesperson of America was very frank towards Japan. However, the new Trump administration also acknowledged the ambitions of Abe in responding to the changing sands. At the same time, the Trump administration stressed the importance of Japan and the valued close cooperation between both nations.

The statement further said, “Prime Minister Abe has highlighted a number of areas for reform, including ones relating to corporate governance, medical care, and labor markets.  We remain hopeful that the Abe administration will continue to undertake ambitious domestic regulatory reforms to create new economic opportunities and further open Japan’s economy.”