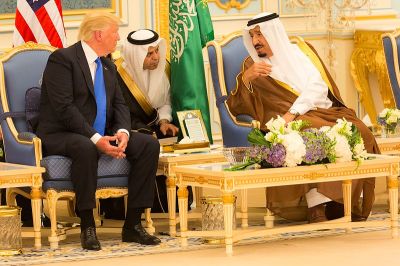 Crown Prince Mohammed bin Salman of Saudi Arabia will appear vindicated for his anti-Iran policies, on the news that America will pull out of the nuclear deal with Iran. Indeed, gradually a new policy of confrontation with other nations is building in America in the realm of economics and geopolitical concerns aimed at the Russian Federation and Iran. Hence, the more diplomatic approach taken by the former Obama administration towards Saudi Arabia is over – in other words, it is the convergence of Washington and Riyadh once more.

President Donald Trump of America loathed the Iran nuclear deal and despite the best intentions of France, the leader of America finally enacted on pulling out of the nuclear deal. Trump stipulated, “This was a horrible one-sided deal that should have never, ever been made… It didn’t bring calm. It didn’t bring peace. And it never will.”

The Crown Prince shares the same view hence tensions in Bahrain, Syria, Yemen, and other areas, in relation to the foreign policy objectives of Iran. Indeed, in recent times Saudi Arabia lambasted Iran to an extreme. Equally important, in relation to the Iran nuclear deal the Crown Prince uttered, “Delaying it and watching them getting that bomb, that means you are waiting for the bullet to reach your head.”

The Crown Prince took further aim at Iran by stipulating, “If they have a nuclear weapon, it’s a shield for them to let them do whatever they want in the Middle East, to make sure that no one attacks them or they will use their nuclear weapons.”

Hence, it is abundantly clear that Saudi Arabia increased its anti-Iran stance and appealed openly to Trump to pull out of the Iran nuclear deal. Indeed, the Crown Prince compared Ayatollah Ali Khamenei with being a new Hitler. He stated, that the Ayatollah “…wants to create his own project in the Middle East very much like Hitler, who wanted to expand at the time… Many countries around the world and in Europe did not realize how dangerous Hitler was until what happened, happened. I don’t want to see the same events happening in the Middle East.”

In a similar way, Trump equally doesn’t trust the current elites in Iran even if his usage of words is based on more restraint than Saudi Arabia. Trump stipulated, “It is clear to me that we cannot prevent an Iranian nuclear bomb under the decaying and rotten structure of the current agreement… The Iran deal is defective at its core.”

Israel will equally be contented with America under the current hawkish leader of this nation by the actions of Trump. Hence, it is abundantly clear that the social reformist Crown Prince is set on developing a new America, Israel, and Saudi Arabia alliance against Iran. Therefore, Saudi Arabia will equally pressurize many Sunni Muslim nations to rethink their policies towards Israel, even if distrust remains for many – or, the bridge is too far for some nations. Either way, the reformist Crown Prince is equally creating new ripples just like Trump is in America.

Reuters reports, “Trump’s decision is a snub to European allies such as France, Britain and Germany who also are part of the Iran deal and tried hard to convince the U.S. president to preserve it. The Europeans must now scramble to decide their own course of action with Tehran.”

Iran will focus on new overtures towards China, France, Germany, the Russian Federation, and the United Kingdom who all favor the nuclear deal. Hence, Trump is gradually upsetting the applecart in the area of economics and geopolitics towards friend and foe by putting the national interests of America first. At the same time, Trump is abiding by Saudi Arabia in the Middle East and listening strongly to the Crown Prince.

President Hassan Rouhani of Iran responded calmly by stating, “If we achieve the deal’s goals in cooperation with other members of the deal, it will remain in place… By exiting the deal, America has officially undermined its commitment to an international treaty.”

Rouhani also stressed, “I have ordered the foreign ministry to negotiate with the European countries, China and Russia in coming weeks. If at the end of this short period we conclude that we can fully benefit from the JCPOA with the cooperation of all countries, the deal would remain.”

However, for Rouhani, he may face further pressure from hawkish forces in Iran thereby setting the stage for a clash with America and Saudi Arabia. This internal angle is worrying China, France, Germany, the Russian Federation, and the United Kingdom. Despite this, Trump and the Crown Prince are adamant that Iran is a threat to the region even if other major nations don’t agree.