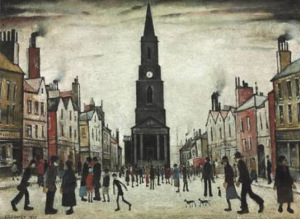 L.S. Lowry (1887-1976) and Sawako Utsumi come from two very different cultures that have been shaped by the respective faiths of Buddhism, Christianity, and Shintoism. Of course, in modern day Japan and the United Kingdom then secularism is altering the religious landscape. At the same time, new faiths in the United Kingdom representing Hinduism, Islam, and Sikhism are especially impacting in major cities. Likewise, the legacy and the reality of the Industrial Revolution was especially potent for Lowry whereas for Utsumi, a contemporary artist from modern Japan, then her reality is shaped by the countryside of the Sendai region to the neon lights of Tokyo.

Lowry during his artistic informative years still wasn’t sure about the direction he was going in. However, just like the chaos of life, one day a new reality dawned on Lowry whereby he would firmly focus on what inspired him. In saying this, Lowry is much more diverse than most people appear to realize. However, his legacy belongs to urban and industrial themes dotted by individual forms of people. 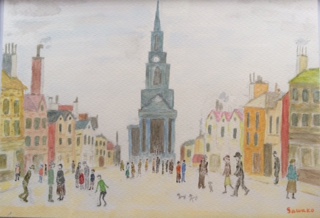 Lowry says “At first I detested it, and then, after years I got pretty interested in it, then obsessed by it … One day I missed a train from Pendlebury – (a place) I had ignored for seven years — and as I left the station I saw the Acme Spinning Company’s mill … The huge black framework of rows of yellow-lit windows standing up against the sad, damp charged afternoon sky. The mill was turning out … I watched this scene — which I’d looked at many times without seeing — with rapture…”

Utsumi, coming from a very different culture and environment – and being born in the mid-1970s – brings a new light to the darkness and natural beauty of Lowry. In Utsumi’s two art pieces in this article (painting 2-4), whereby she is paying homage to the rich legacy of Lowry, Utsumi brings the light of her grandparents (now passed away but remaining strongly within her heart) and the environment she knows. 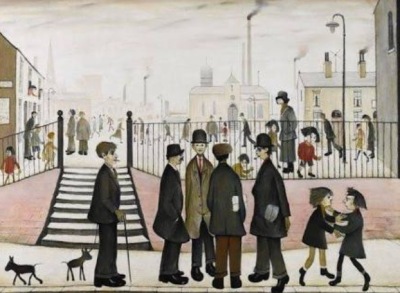 The contrast from the originals by Lowry – to the creativity of Utsumi – creates a natural state of mind that highlights the difference in time and perspectives. In the world of Lowry, you had hard working people battling against the reality of industrialization, pollution, and poverty. However, for Utsumi, while acknowledging that poverty still persists in modern Japan and the United Kingdom, the neon lights of Tokyo to the comforting rural areas of the Sendai region provides hope.

Overall, the different angles shine magically because Utsumi prefers to focus on her own reality of Lowry. This applies to an inner beauty that isn’t masked by the themes and darkness of certain art pieces by Lowry. Therefore, the spark that Lowry created is extremely important to this modern Japanese artist who hails from Sendai. 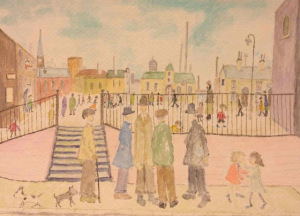 Given this reality, Utsumi is paying homage to Lowry based on different thought patterns and periods of history. The end result is extremely uplifting because the power of the originals by Lowry will always remain potent. At the same time, the lightness of Utsumi illuminates her own personal creativity while not distracting from the richness of Lowry.

Some art and cultural articles by Modern Tokyo Times are republished based on the need to inform our growing international readership about unique realities related to Japan.