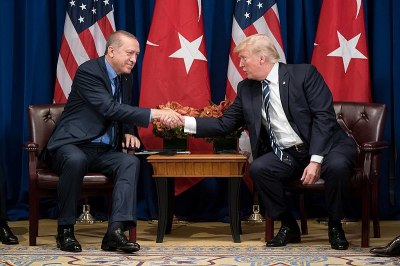 President Recep Tayyip Erdogan of Turkey is known for intrigues against regional nations, including Iraq, Israel, and Syria, while also imprisoning all and sundry after a failed coup in Turkey. Hence, endless power concentration is in the hands of Erdogan and the dominant political party he governs with an iron fist. However, it seems that challenging President Donald Trump of America is backfiring against Turkey because the spat is leading to enormous economic strains.

America and Turkey, two NATO allies, are at loggerheads over many issues but the imprisonment of a Christian Pastor is reverberating within the Trump administration in recent times. Yet, while individuals inside the ruling party in Turkey will be alarmed, it remains to be seen if Erdogan will back down immediately – even if he is forced to relent over this issue and other sensitive areas between America and Turkey.

Trump, in relation to the persecution of the Christian pastor Andrew Brunson, explicitly warned Turkey that America is increasingly alarmed by the behavior of this nation. Trump stipulated, “The United States will impose large sanctions on Turkey for their long time detainment of Pastor Andrew Brunson, a great Christian, family man and wonderful human being.”

Trump further stated, “He is suffering greatly. This innocent man of faith should be released immediately!”

However, despite the warning given by the Trump administration, the elites under the authoritarian-leaning Erdogan didn’t listen. Hence, Trump announced increased tariffs on aluminum and steel hailing from Turkey. This, and the political rift between both nations – and, an already weak currency – meant a huge tumble of the Turkish Lira took place.

The leader of America said after announcing new tariffs, “I have just announced a doubling of Tariffs on Steel and Aluminum with respect to Turkey as their currency, the Turkish Lira, slides rapidly downward against our very strong Dollar.”

Trump further stated, “US relations with Turkey are not good at this time.”

The BBC reports, “In the past 24 hours, the lira has lost around 20% of its value. It had already fallen more than 40% in the past year.”

Erdogan, countering Trump, said, “Some countries have engaged in behavior that protects coup plotters and knows no laws or justice…Relations with countries who behave like this have reached a point beyond salvaging.”

However, it seems that Erdogan will be forced to climb down over the Christian pastor – and bigger issues in relation to ISIS (Islamic State), military deals with the Russian Federation, anti-Kurdish policies in Northern Syria, Israel, the endless imprisonment of individuals in Turkey – and other important areas. If not, then Turkey will have to realign itself while expecting further economic strains. Therefore, it is up to the ruling party to constrain Erdogan because the people of Turkey don’t need to suffer economic pain alongside seeing a political downward spiral based on the authoritarian nature of the current leader of Turkey.