Chancellor Kurz of Austria received openly by CDU in Germany: Visegrad and Europe 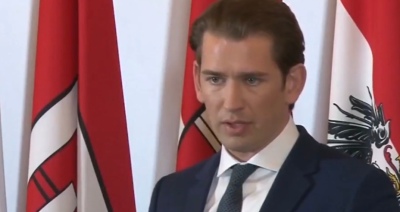 The dynamic Chancellor of Austria, Sebastian Kurz, was widely received in Germany by the Christian Democrats (CDU) at a conference he was invited to in Erfurt. This is a far cry from many skeptics inside the CDU who have mixed feelings toward the leader of Germany on issues surrounding culture, immigration, and protecting Europe. After all, Chancellor Angela Merkel’s policy of mass immigration in Germany is sending internal and external shockwaves.

Visegrad nations welcome the voice of Kurz in Austria because he is strengthening the stance of the Czech Republic, Hungary, Poland, and Slovakia. Equally important, certain sections of the CDU in Germany now have a young and dynamic politician to aspire to in neighboring Austria. Hence, it is Merkel who now seems out of touch with the new changes sweeping Germany, rather than the young vibrant Chancellor in Austria who is reaching out to all generations who are disenchanted with the politically correct.

In an article by Modern Tokyo Times published in July, it was stipulated, “Kurz isn’t a confrontational leader who makes petty sound bites. Instead, he seeks solutions internally in Austria and further afield in the EU. This reality means that despite Kurz opposing the mass immigration policy agenda of Chancellor Angela Merkel in Germany, he still seeks extremely good relations with Merkel. Therefore, it is hoped that Austria will continue to reach out to other nations while in charge of the EU presidency, thereby guarding the gates of Vienna and the EU collectively with forces that seek to preserve the identity of Europe.”

The article further stated, “It is hoped that Kurz, the Visegrad bloc, a new Italy, and other nations that are fed up with France, Germany, EU bureaucrats, and other anti-European forces, will unite in order to protect the European continent. Therefore, the presidency under Austria provides a greater voice to the “Old Europe” that in time should become the “New Europe” that safeguards European values, the role of Christianity, and supports the wishes of the indigenous that don’t seem to count among the politically correct elites and globalists.”

CDU members in Erfurt welcomed Kurz with open arms because they know that he is a leader who not only inspires but who seeks to enact rather than just promise empty political statements. Equally important, Merkel understands that she is vulnerable and that the CDU is struggling internally, in relation to past political results. Hence, for CDU members who seek a stable Germany based on continuity, acknowledging a strong cultural identity, and preserving a strong European identity – then Kurz is a reminder that traditional conservatism is alive and kicking.

Naturally, this, and other statements made by Kurz were widely received by CDU members – something that Merkel can no longer reach with any passion based on trust. The leader of Austria wants a united EU based on preserving the indigenous cultures of the continent and focusing on positive areas in relation to economics. He, like many CDU members in the audience, know that the statement by Kurz can only be met if refugee quotas by Merkel are abolished, stopping the endless intrigues of “fake” humanitarian organizations that have an anti-European agenda and who are boosting people smuggling and other ills, and erecting centers for asylum seekers outside of the EU. Therefore, the young voice of Kurz was welcomed by the CDU in Germany – just like he is welcomed by Visegrad nations and new political forces in Italy that seek a fresh approach.