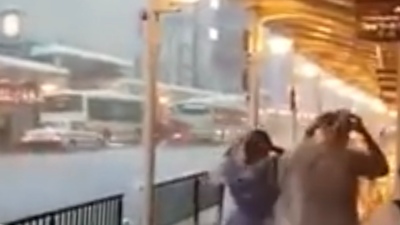 One of the strongest typhoons to hit Japan in 25 years is known to have killed at least six people. The fear is that Typhoon Jebi will account for more deaths once the impact is fully known. Hence, the real destruction of Typhoon Jebi will not be known until later tomorrow.

Alongside the deaths of six people, it is known that at least 160 people have suffered from various types of injuries. On top of this, the fear is that landslides may occur in more remote areas before the latest typhoon passes through Japan.

Not surprisingly, the transportation system was badly hit and many companies and schools took precautions in Central and Western Japan. The latest typhoon to hit Japan sadly comes on top of other recent natural events that have killed many people. This relates to landslides and the horrendous heat that is responsible for killing many Japanese nationals.

The BBC reports, “Japan’s weather agency has warned of possible landslides, flooding and violent winds, as well as high tides, lightning and tornadoes in the areas affected.”

Modern Tokyo Times reported yesterday, “Indeed, the Japan Meteorological Agency (JMA) is predicting winds that could reach a potent 252km an hour. In other words, the JMA is notifying local prefectures and the central government – and people residing in areas expecting to be hit by the typhoon – to prepare for the worse based on recent tragedies.”

Sadly, the JMA was correct because it is known that at least six people have perished and the fear is that landslides, flooding, and other events will follow shortly after Typhoon Jebi leaves Japan. Hence, with many areas in Central and Western Japan being hit, the fear is that the Kii Peninsula – and other surrounding areas – will witness further chaos based on the aftershocks of Typhoon Jebi.