Medvedev, a very astute politician, poured cold water on raised voices emanating from Japan. He pointed out strongly, “It is our land, it is an entity of the Russian Federation. These islands are part of the Sakhalin Region. Why should we be concerned about it?”

In truth, President Vladimir Putin of the Russian Federation is more open to addressing certain concerns of Japan. Yet, these concerns, according to Putin, can only be addressed providing Japan provides guarantees that the armed forces of America will not deploy its military in swathes of Northern Japan. Also, for Putin, it is imperative that Japan is sincere towards the Russian Federation. Equally important for Putin, Japan’s foreign policy must become disentangled from America’s containment policies aimed at China and the Russian Federation respectively. In saying this, Putin isn’t interested in handing over the main areas of the Kuril Islands – instead, more outlying areas of lesser significance providing Japan follows the above demands and other areas of dispute. 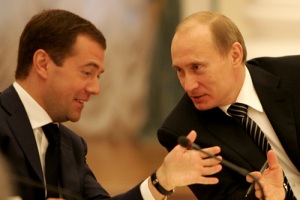 Of course, Medvedev is equally worried about the above in-line with Putin. However, it appears that Medvedev is more nationalistic in preserving the sovereign territory of the entire Kuril Islands. Hence, Medvedev, in step with the armed forces of the Russian Federation and the majority of nationals of this nation, doesn’t seek a compromise. On the contrary, Medvedev desires to develop the region further in order to consolidate the livelihoods of the people who reside in this remote part of the Russian Federation. Alongside this, Medvedev is concerned deeply by the geopolitical significance of the Kuril Islands and the need to develop the military defense of this remote area – of course, Putin follows the same concern despite being more open to Prime Minister Shinzo Abe of Japan.

Yoshihide Suga, the Chief Cabinet Secretary of Japan, protested the visit of Medvedev to Iturup (Etorofu Island in Japan). However, Medvedev pointed out that no politicians of the Russian Federation would ever ask permission of a foreign entity to visit any part of the nation-state. Of course, this applies to all sovereign nations.

Medvedev uttered, “…the more indignation is, the more reasons to come here for Russian government representatives, and that’s what we will do, of course.”

Ironically, in the eyes of the Russian Federation, it seems somewhat strange that Japan plays the territorial and sovereign angle over the disputed region, despite American military bases being allowed throughout Japan. Likewise, Japan is entangled by the containment policies of America that are aimed at China and the Russian Federation respectively.