Belgium with the highest per-million death ratio from coronavirus: Yet, misleading!

The nation of Belgium is blighted with the highest ratio of deaths per million citizens of any major nation from coronavirus (Covid-19). Indeed, the only other part of the world with a higher rate is the small microstate of San Marino with a minuscule population. Therefore, while Italy and Spain rightly hit the headlines in Europe, followed by France and the United Kingdom, in terms of deaths per million then Belgium appears to be the worst-hit nation.

On April 19, leading deaths from coronavirus in Europe are Italy 23,660, Spain 20,595, France 19,718, United Kingdom 16,060, and then Belgium with 5,683. The nation with the newest cases on this day is Russia 6,060, United Kingdom 5,850, Italy 3,047, Spain 2,248, and Germany with 1,460. Hence, these figures highlight nations that have been hit the hardest – and that Russia and the United Kingdom are amid the increasing flow of coronavirus cases in Europe. Thus, for Belgium, it is hoped the crisis is now leveling off despite the seriousness remaining.

Flanders was especially hit hard in Belgium from the outset. However, the reason appears more mundane and based on counting. Hence, it appears that Belgium is highlighting the full severity of the coronavirus crisis in Europe.

Emmanuel Andre, the spokesperson for the Health Ministry, is adamant that it is important to count all coronavirus deaths. Thus Belgium knows the real severity of the crisis and how to tackle weaknesses in the system.

He uttered, “So the point of including suspected cases is to get the best picture of the level of this outbreak in our community, including outside the hospitals.” 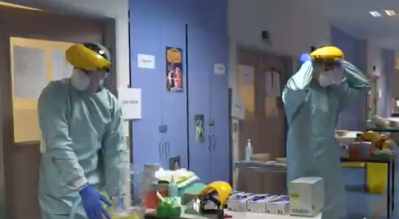 Sophie Wilmes, the Prime Minister of Belgium, is hoping to ease restrictions in early May based on the belief that the situation is easing up. She said, “The prospect of a better future is within our reach.”

Wilmes continued, “The strategy will be based on certain pillars – maintaining a safe distance, large-scale screening and also tracing … and the development of new rules at the workplace.”

Overall, it seems that deaths will be recorded more broadly at later dates in other European nations. Hence, the real severity of coronavirus in Europe will be finally known when nations follow the model of Belgium. Therefore, while Belgium appears to be the hardest hit nation in Europe in terms of deaths per million, it is clear that this is based on Belgium’s more enlightened approach and not neglecting deaths outside of hospitals.