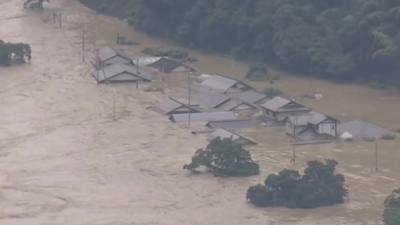 Heavy torrential downpours in Kyushu are believed to have killed at least 40 people. At the moment, the news is sketchy and the declaration of deaths is slow. However, based on confirmed deaths reaching 22 and the numbers missing, it appears that the death toll is approximately 40 but this may increase.

Alarmingly, even while rescue operations are ongoing, more torrential downpours are forecast. This especially applies to Kumamoto prefecture where floods have caused havoc followed by landslides.

The Kuma River flooded in many locations after banks were broken by the severity of the torrential rain. Some cities became cut off because of the combination of flooding, mudslides, collapsed buildings, and debris blocking roads.

It appears that most fatalities will be elderly people. This applies to people living alone and people killed at a care home that became submerged by the deluge. Therefore, most elderly citizens were unable to flee the crisis.

It is known that nine people perished in the city of Hitoyoshi and the same number in the town of Ashikita. Also, it appears that 14 elderly citizens have died in the same nursing home in Kuma. Hence, it highlights the utter devastation of Kumamoto prefecture that bore the brunt of the heavy rain that hit Kyushu.

Many individuals have died and others have had their homes completely devastated. Thus the fragility of Japan is seen once more because of various types of natural disasters that blight this nation.