Art of Japan and Traditional Fashion: Ito Shinsui and Bijinga 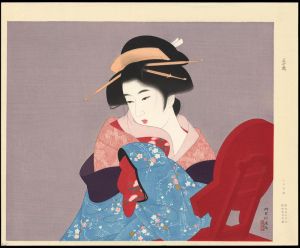 Ito Shinsui (1898-1972) is a “famous son” of Japanese art because his art is blessed with elegance, sophistication, and serenity. This is equally matched with natural simplicity and adorable color schemes when applied to his images of beautiful ladies and landscapes. Therefore, if you want to imagine the natural beauty of “the old world” and the stylish nature of traditional Japanese fashion styles for ladies, then Shinsui does this with panache, amazing color schemes and elegant depictions of stunning ladies.

Also, the adorable color schemes highlight the exquisite beauty of traditional Japanese clothes for ladies. In terms of fashion, he enables the richness of Japanese culture to be seen through the majestic styles and color co-ordinations of traditional clothes. This angle and connection just begs for admiration because Shinsui makes everything seem elegant and cultural.

Therefore, in the modern world of fashion you will see many amazing boutiques which highlight the rich embroidery, creativity, and amazing fabrics, of modern day fashion. The same applies to visiting famous fashion shows in Paris, New York, Milan, Tokyo, London, and other high octane fashion exhibitions which highlight elegant models and various styles. However, the art of Ito Shinsui and the amazing styles he depicts would grace any modern fashion show. This applies to panache, grace, color schemes, rich fabrics, buzzing creativity and other important factors.

On the website called Fujiland by B.C.Liddell it is stated that: “Shinsui Ito was a central figure in Japan’s artistic identity crisis during the 20th century. As wave after wave of artistic ‘isms’ from overseas broke upon these shores, native artists felt compelled to either abandon their own rich artistic traditions or embrace them even more strongly. Ito … was one of those artists who chose the latter course, joining the Nihonga movement, which looked to Japan’s past for inspiration rather than the confusing plethora of ideas pouring in from abroad.”

“When he was 18, he joined Shinhanga Undo, a group which aimed to revive the methods and styles of ukiyo-e. This had a profound influence on the style and themes of his paintings which abound with the images of nature and feminine beauty found in traditional Japanese wood block prints. Joshin (Unsullied Morning) (1930), a beautiful picture depicting a group of naked women bathing in a natural hot spring combines both of these aesthetics. The color of the bathers is so softened by the steam and blended into the surrounding nature, that it is only the blackness of their hair that first alerts us to their presence.”

“Nihonga differs markedly from Western painting in the materials used. The emphasis, as with so much in Japanese culture, is on the use of entirely natural materials. Paper and silk, mounted on board, wall scrolls or on folding screens, are used instead of canvas.”

The most notable comment on this website about Ito Shinsui is that: “Japanese art inspired by the imported artistic movements of the 20th century often looks derivative and dated, but the work of Shinsui Ito retains its sincere beauty and timeless appeal.”

Therefore, not only did Ito Shinsui maintain a connection with past Japanese art but his bijinga art is also timeless. This most certainly applies to his finest collection because you can connect the image with the most exquisite kimono during the Taisho and Showa period. However, because of the adorable color schemes and highlighting the stunning nature of traditional Japanese clothes – then, the fashion angle is equally rewarding because his powerful art isn’t out of place in the modern period. 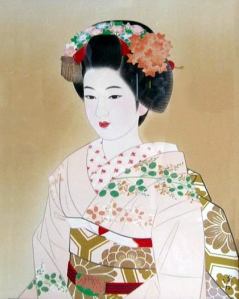 Ito Shinsui truly belonged to the Shin Hanga art movement and Watanabe Shozaburo, a famous publisher, must be credited with opening up many doors for this amazing artist. Their relationship would remain strong for many decades and both individuals benefited.

The beauty of Ito Shinsui is that he connects the old art world of Japan with the new world in a way that is natural. His gracefulness is a wonder to behold. Therefore, Shinsui is fondly remembered for the art he produced and the “timeless” nature of his art.