Japan Art and Kiyochika: Artist Fighting on the Wrong Side of History

Kobayashi Kiyochika (1847-1915) fought on the wrong side of history, if you happen to be a pro-Meiji modernizer during his early years. The alternative view is that he fought on the side that desired to preserve the status quo against reforms being implemented by the last ruling Shogunate. Either way, it is clear that with his family background supporting the ruling Shogunate in the lower ranks of the military, the new order within Japan must have led to certain bitter memories and disappointments during the early Meiji period.

Luckily for the ukiyo-e art world, Kiyochika would put enormous energy into art during the middle of the 1870s. Thereby preserving a rich identity through the medium of art. Of course, Kiyochika was also open to the new changes impacting on Japan because he was quick to adapt to reality.

Despite this, one can only imagine how he felt about the Meiji Restoration in 1868 alongside the new challenges facing Japanese woodblock (ukiyo-e) artists. After all, the impact of new technology throughout the Meiji period, and the growing influence of Western art, meant times were changing rapidly. However, Kiyochika’s inquisitive nature meant he would embrace the changing face of Japan in order to find himself despite not being in unison with modernity just for the sake of it.

Ironically, despite supporting the side of the Shogunate, it would be the impact of the Meiji era that would shape his future. The middle of the 1870s saw enormous personal development for Kobayashi. This notably applies to meeting the English cartoonist and painter Charles Wirgman; studying photography; and plying his trade in the field of art.

On the Artelino website it says: “From 1876 on Kobayashi Kiyochika created his first woodblock prints, scenes from Tokyo. Although his prints were basically kept in traditional Japanese style, Kiyochika used Western elements like perspective, the effect of light and the graduations of shadows. By that time he probably had read about the French impressionists and seen photographs of their works in newspapers.”

Artelino also points out the significance of war prints during the early Meiji period for Japanese woodblock prints that would provide some breathing space. After all, other artistic forms and the growing influence of photography were impacting greatly on the old order of Japanese woodblock prints. This meant that from a commercial point of view the Sino-Japanese conflict, and other Meiji intrigues, would enable breathing space before the emergence of a new artistic dawn. 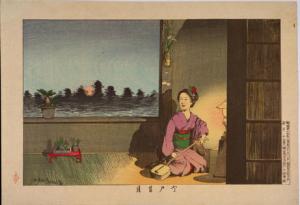 On the Smithsonian website it says “When Kobayashi Kiyochika (1847–1915) returned to his birthplace, which he had known as Edo, in 1874, he found a city transformed. Renamed Tokyo (Eastern Capital), it was filled with railroads, steamships, gaslights, telegraph lines, and large brick buildings—never-before-seen entities that were now ingrained in the cityscape.”

Kiyochika may have initially fought on the wrong side of history. Despite this, he managed to escape many shackles related to the revolutionary period in order to ply his trade in the field of art.

http://www.si.edu/Exhibitions/Details/Kiyochika-Master-of-the-Night-5134 – For further details about the exhibition then please check this website.