France is Re-thinking its anti-Syria Stance: Hezbollah or Takfiri and Sectarian Barbarity? 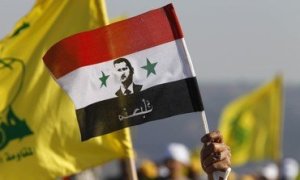 The government of President Hollande in France sadly joined the anti-Syria alliance against secular Syria. This witnessed secular France allying itself with sectarian and Takfiri sponsoring nations, most notably this applies to Qatar, Saudi Arabia and Turkey. America and the United Kingdom also supported the intrigues of the Free Syrian Army (FSA) and various other sectarian groups – and other nations like Jordan and Kuwait opened various treacherous channels. However, in the wake of improved ties with the Russian Federation and Egypt – and with the reality of blowback in relation to the recent terrorist attacks in France – then it appears that back channels are beginning between Damascus and Paris.

Recently four political leaders within the government of France visited Syria after certain consultations took place within Lebanon. Of significance, the French delegation met a notable Christian leader in Lebanon, who happens to have favorable ties with Hezbollah and the government of Syria.

President Bashar al-Assad and the Syrian government at all times have stated that they are open to dialogue, even with nations that have inflicted so much pain on this nation. Indeed, while political leaders in America, France, Qatar, Saudi Arabia, Turkey, and the United Kingdom, have all ranted misinformation, it is noticeable that the leader of Syria remains calm and steadfast. Of course, the armed forces of Syria – and the overwhelming majority of the citizens of this nation – also remain steadfast despite outside nations trying to split this nation asunder.

Qatar, Saudi Arabia and Turkey – and ratlines in Kuwait – are still continuing with their Takfiri and sectarian war against the people of Syria. This barbaric policy also emboldened various Takfiri, al-Qaeda and sectarian forces in Iraq and ignited growing tensions in parts of Lebanon. In other words, these four Sunni Muslim dominated nations cared little about not only destroying and creating sectarianism in Syria, but they also cared zilch about the consequences to Iraq and to a lesser degree Lebanon. Iraq, therefore, was undermined by the meddling of regional Sunni Muslim dominated nations alongside the meddling of America, France and the United Kingdom. However, it now appears that France is stepping back because of blowback at home and the realization that the Russian Federation internationally – along with Egypt and other nations like Iran – are now holding sway with more nations because of Takfiri and sectarian barbarity in Iraq, Libya (power vacuum and not sectarian apart from attacks against Sufi shrines and migrant Coptic Christians) and Syria.

The French delegation that met Syrian government officials is the first direct contact since 2012 in an official capacity – irrespective of what the Ministry of Foreign Affairs says in France. This reality means that the four French parliamentarians and other important individuals were involved in feelers being put out by the leader of France. Officially, this will most likely be denied but in truth the inclusion of Gerard Bapt and Patrick Barraquand does indicate that the meeting was a significant step in the right direction. The close relationship between Bapt and Hollande meant that he kept a more distant theme. However, this is based on internal issues related to Hollande and his anti-Syria policy – and in relation to public media consumption – along with testing the waters in relation to a new agenda by elites in Paris.

Jean Aziz at Al-Monitor reports: “The delegation was headed by French Parliamentarian Jean-Pierre Vial and included Parliament members Jaques Myard and Francois Zocchetto, as well as the Inspector General of the French Ministry of Defense, Patrick Barraquand, Security Adviser at the French Embassy in Beirut Stephane Ravion and Jerome Toussaint. The delegation also included Parliament Member Gerrard Bapt, who is also a close associate of French President Francois Hollande, of whose party he is also a member. Reportedly, while in Damascus, Bapt’s movements and meetings differed from those of his colleagues.”

It is noticeable that the delegation entered Syria after meetings in Lebanon with a powerful Christian political leader. This is based on the reality that ties with this individual and Hezbollah are more than positive. Indeed, the role of Hezbollah in Lebanon and Syria is based on religious coexistence with all faith communities. This reality applies to all Christian and Muslim sects and with the Druze community that is unique to the region. Therefore, Hezbollah, that supports the religious mosaic in Syria, is a true partner in the war against brutal Takfiri barbarity and sectarianism. After all, Hezbollah stands by the Palestinian movement and clearly the majority of Palestinians are Sunni Muslims.

In another article by Modern Tokyo Times it was stated: “It is ironic that Hezbollah (Hizbullah) in Lebanon under His Eminence, Sayyed Hassan Nasrallah, is more concerned about the plight of Christians and other religious minorities, rather than the so-called democratic West. Indeed, it is abundantly clear that America, France and the United Kingdom are fully behind the emptying of Christians throughout the Middle East based on their close ties with feudal Gulf monarchies. Therefore, while Saudi Arabia bans the Christian faith it is clear that Western meddling in Iraq, Libya and Syria is leading to a catastrophe for the Christian populations of these nations. Indeed, it is even hard to say nations about Iraq and Libya because Gulf and Western destabilization polices have led to failed states. Syria, thankfully, is fighting tenaciously in order to preserve the religious mosaic and to prevent another failed state.”

Further down in the same article by Modern Tokyo Times it was commented: “Of course, there are no crosses and Christian churches in Saudi Arabia and nor did Western powers care about the plight of Christian converts in their new Afghanistan. After all, despite all the funds spent on Afghanistan it is clear that apostates to Christianity face prison and death. More alarmingly, the direct policies of Western and Gulf nations in Iraq are creating one big graveyard for Christians in this nation. This reality is based on the original invasion of Iraq and then further installed once Gulf and Western powers supported the destabilization of Syria.”

Nasrallah fully understands the brutality of Takfiri sectarian fanatics that hate all and sundry, including butchering fellow Sunni Muslims they easily deem apostates. Therefore, the esteemed leader of the Shia in Lebanon said: “Indeed, Takfiri terrorism is now present in the entire region in the form of armed groups in most- and perhaps in all- the states of the region. These movements or groups follow a Takfiri approach that eliminates, excludes, and deems everyone’s blood permissible, except for themselves. So, it has nothing to do with Sunnites, Muslims, or Christians. They deem the blood of the Christians to be permissible. Within the Islamic sphere, they definitely deem the blood of Shiites, Alawis, Druze, Ismaelis, and Zaidis permissible. Even within the Sunnite sphere, they deem the blood of all Sunnites except for themselves to be permissible. The simplest thing for them is to say: You are an unbeliever. You are an apostate.”

Christians in Lebanon and Syria fully understand that outside nations in the West and Gulf did little to stem the rapid demise of the Christian faith in Iraq after Saddam Hussein lost power. Similarly, in Afghanistan despite vast sums spent on this nation, it is clear that religious pluralism isn’t on the agenda and the role of women in general – apart from certain elites in Kabul – is clearly detrimental since outside nations meddled in this nation. Likewise, the small Christian minority in Libya is under siege because of Takfiri Islamists and an array of various different militias. Overall, vast numbers of Muslims have been killed after outside Gulf and NATO meddling because terrorism, sectarianism and the failed state followed in Afghanistan, Iraq and Libya. At the same time, religious minorities like Christians, Yazidis and Shabaks in respective nations have suffered terribly and women have been forced into the shadows. Also, the endless persecution of the Shia is extremely alarming because Takfiris also turn against all Shia civilians because of the Takfiri bloodlust.

The Syrian Arab News Agency covered the French delegation and reports: “The visit, which took place two days ago and included meetings with President al-Bashar Assad and Foreign Minister Walid al-Moallem, carried a political message saying that time has come for the West to reconsider its wrong politics on Syria, said al-Laham in a statement to the Lebanese as-Safir newspaper published Friday.”

In the same article, it is stated: “This message also encourages holding dialogue with the Syrian government and cooperating with it in the fight against terrorism, said al-Laham who also met with the delegation, noting that the French figures openly stressed that this cooperation is badly needed in order for the Islamic State in Iraq and Syria (ISIS) to be defeated.”

Modern Tokyo Times comments strongly: “The simple reality is that Christians in the Levant, irrespective if they don’t support Hezbollah and the Syrian government, must realize that their future relies on Hezbollah and Syria under the prevailing conditions. If Christians doubt this, then just look at what is happening in Iraq and in areas under the control of forces being supported by Gulf and NATO powers in Syria. In other words, Christians have a future under President Bashar al-Assad just like they have a future based on the policies of Hezbollah in Lebanon and throughout the Levant. However, if the enemies of Hezbollah and Syria get their way then Christians should expect another Northern Cyprus, Kosovo, Iraq and Libya.”

Nasrallah warns: “If these (Takfiri groups) win in Syria, and God willing they will not, Syria will become worse than Afghanistan.”

It is hoped therefore that the government of Hollande in France will finally wake up to past misdeeds against Syria. In this sense, it is imperative that the French delegation builds on the meetings that took place within Syria and Lebanon. If not, then more Syrians will die because of outside meddling and various minority religious communities will face the Takfiri sword. Also, just like Iraq was destabilized once more because of outside nations trying to destroy Syria, then if the central government collapsed in Damascus then clearly Lebanon would face the consequences.

Nasrallah sums up perfectly the bloodlust of Takfiris that are being backed by hostile nations towards Syria and which endangers Lebanon. He states: “It goes without saying that the Takfiri approach of terrorism has proven undoubtedly that it’s the enemy of all, without exception, because it is a bloody destructive approach that is based on blind fanaticism and the mentality of exclusion, slaughter and lynching.”

Of course, it is too early to say that France is finally coming to its senses but the signs are promising. If France really does support secularism and the mosaic of the Levant, then the choices are stark when it applies to the final outcome. On one hand you have the multi-religious armed forces of Syria along with the movement of Hezbollah supporting all faith communities in the Levant. While on the other hand you have brutal Takfiri and sectarian forces being sponsored by various Gulf and NATO powers. After all, the moderate opposition is just a Western mirage that melts into ISIS, al-Nusra and other brutal sectarian forces. Therefore, does France want the religious mosaic to survive – or does France want a Levant whereby sectarian violence is endless and where smaller religious communities flee their homelands, just like what happened in Iraq?