Isoda Koryusai is a man of mystery even today because much remains up in the air about important aspects of his life. Koryusai was born in 1735 and died in 1790. He became active during the 1760s and until a few years before his death. However, major aspects remain debatable about his life but despite this he was a fine artist who graced the Japanese art world.

Unlike the vast majority of Japanese woodblock print artists Koryusai was born into an elite samurai family. Therefore, he was one of only a few who entered the ukiyo-e art world from such a lofty background. This meant that he saw aspects of Japanese society and culture from a different way to the majority of ukiyo-e artists and this reality shines through his art.

Koryusai understood the importance of stratification and Confucian thinking because his early life was based on conformity and not upsetting the applecart. However, either he turned to the art “within him” or he was forced to enter the world of art because of financial factors. Sadly, this area is disputed by many scholars of Japanese woodblock printing therefore much is open to interpretation.

Some scholars of art claim that he became a ronin and because of this reality he took to art in order to survive financially. Others, however, claim that he voluntary entered the art world and gave up being a samurai because art was embedded in his soul. This area is very important because in order to feel the passion and soul of Koryusai a great deal relies on this.

Of course, nothing can take anything away from the art of Koryusai irrespective of the real reasons behind changing his lifestyle. However, the vagueness of knowledge means that it is difficult to get close to the “real” Koryusai. 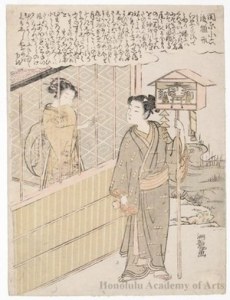 Dan McKee says: “There is no certain evidence to prove this fact, but it is often assumed that Koryusai began his printmaking work as a pupil of Harunobu Suzuki, whose style can indeed be seen in Koryusai’s early work, though also in the work of some other print artists (Shunsho, Shiba Kokan) whose connection to Harunobu seems even less direct. The same can be said for Koryusai’s early signature, Haruhiro, under which he designed his first prints at around the time of Harunobu’s demise (1769-1770), for use of the “haru” prefix may imply only an effort to appear in the Harunobu line, rather than an actual master-disciple relationship (ala Harushige).”

“Similarly, the inscription on one 1770 print, claiming it to be a design by Harunobu, for which Koryusai was asked to add color, could as easily represent an attempt to place Koryusai as the direct descendant of Harunobu for commercial reasons, to fill the void left by the death of the first nishiki-e master. It is notable that Koryusai states in this inscription that he “does not know Harunobu’s way but have finished the print with his [Koryusai’s] own brushwork.”

Robyn Buntin (http://www.robynbuntin.com) on the other hand comments that: “Though possibly a pupil of Shigenaga, Koryusai was influenced most by his friend Harunobu whose style can be seen in Koryusai’s early work. His most original work, in which he excelled, was in pillar prints, bird-and-flower prints, and shunga.”

Jack Hillier concludes that: “There is always, especially among collectors, a tendency to make comparison between artist and artist, and with Koryusai it is perhaps a case of we look before and after and pine for what is not.”

Koryusai therefore remains a man of mystery but despite this reality he produced stunning art and gave much to the Japanese woodblock printing world. Therefore, it is best to let the man of mystery remain to be this, rather than creating or trying to formulate conclusions that are incorrect.

The final years of his life appear to be based on focusing on his roots because many designs had Chinese connotations and based on typical pillars of samurai elites. Therefore, the foundation laid down in Koryusai’s early life remained deeply within his soul and this reality can be felt strongly within his art.

Some Japanese art and cultural articles by Modern Tokyo Times are republished based on the need to inform our growing international readership – and the need to highlight the unique reality of Japanese culture.