The artist Utagawa Sadahide (Gountei Sadahide) lived to see the first years of Japanese modernization that began in 1868 with the start of the Meiji Restoration. Intriguingly, he also focused on depicting foreign nationals that were now allowed to enter Japan and true to his nature he didn’t focus on generalizations. Therefore, while Sadahide focused on many themes within the world of ukiyo-e, it is also fair to say that his Yokohama-e matches the best forms of this art theme in comparison with other artists who followed suit.

Sadahide also had the luxury to visit Paris in 1867 because he was part of the Tokugawa shogunate’s rich delegation. This reality gave Sadahide a further flavor of Yokohama-e but adopting this to new things that he witnessed during the 1867 International Exposition in Paris. Ironically, within one year the Tokugawa era would be over because now modernity was entering Japan based on the laurels of the Meiji Restoration of 1868. 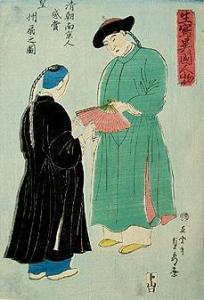 In truth, apart from minor disturbances and limited intrigues within the ruling elites, the Meiji Restoration was a true revolution that was mainly bloodless. Indeed, unlike the French Revolution, the Russian Revolution and the Iranian Revolution that created enormous convulsions based on the deaths of many, the revolution in Japan was based on modernizing rapidly and preventing the country from being colonized by Western powers.

Turning back to the early life of Sadahide then he was born Hashimoto Kenjiro in 1807. From a very early age, he received an enormous break because he studied under the famous Kunisada. This reality means that Sadahide belonged to the notorious Utagawa School and soon he began to illustrate books. While initially focusing on bijin-ga he gradually broadened his horizons in the 1830s and 1840s by depicting musha-e and landscapes. 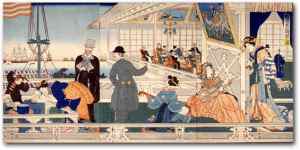 Sadahide continued to prosper and develop by focusing on new themes. Therefore, the First Opium War in China was covered in depth and illuminated to another degree in his Kaigai Shinwa (New Overseas Stories). Similarly, Sadahide highlighted intriguing aspects of a hidden Japan in the furthest north of the country at this time.

In 1854, the elites in Japan decided to end the isolationist period because of many severe factors. Not surprisingly, these new convulsions based on outside encroachment would come to alter the regional dynamics at a later date based on nationalism and imperialism. However, prior to this Sadahide could focus on more innocent themes in relation to Yokohama-e. Therefore, in the late 1850s and early 1860s his art depicted foreign nationals and other areas related to new aspects of culture that was entering Japan. 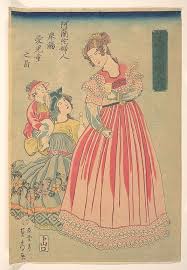 Despite some enmity that existed because of the changing times, Sadahide appears to focus on positive areas in relation to the mixing of Japanese and foreign nationals. Also, his own eyes witnessed many different features of foreign nationals, therefore, he dispelled the myth of everyone having detailed and sharp noses. Similarly, Sadahide was fascinated by cultural interactions in relation to trade and other areas.

Overall, the legacy of Sadahide is very rich therefore by the late 1860s he was one of the most popular artists in the country in relation to sales. One can only imagine how his Yokohama-e and impressions of Paris altered his thought patterns because he was extremely inquisitive.