Terrorists enter Syria based on Gulf and NATO Intrigues: Blockade and Refugees 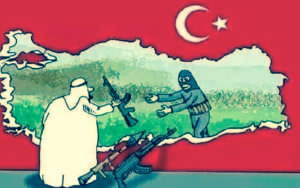 The destabilization policies of major Gulf and NATO powers led to NATO Turkey being an open conduit for terrorists alongside a brutal economic blockade. Not only this, but weapons and international sectarian jihadists utilized many Gulf and NATO military ratlines, while the media ushered in a media war against the government of President Bashar al-Assad. However, despite everything, the armed forces of Syria have tenaciously refused to abandon hope of freeing the nation of an array of barbaric sectarian forces that behead, destroy the ancient culture of the land, and cleanse religious minorities.

It is extremely farcical that nations like Turkey under President Erdogan and Saudi Arabia play the “democratic” and “humanitarian card” in relation to Syria. After all, Kurds in various cities in Kurdish areas of high density in Turkey are now residing in fear and being killed in silence because of media controls. On top of this, when ISIS (Islamic State – IS) were butchering Kurds openly along border areas between Syria and Turkey, then the armed forces of this NATO nation just stood and watched. Similarly, just like ISIS, the nation of Saudi Arabia will not tolerate one single non-Muslim holy place and the Shia face enormous persecution. Likewise, women in Saudi Arabia, just like in ISIS areas, must cover-up from head to toe or face being whipped.

If Gulf and NATO powers had not enabled various brutal sectarian forces to grow in strength and power in Syria, then the refugee crisis would not have spiraled out of control. The same applies to the brutal economic blockade on Syria. These two realities and the media war – based on enormous propaganda – have distorted everything while international jihadists enter Syria via NATO Turkey and other ratlines.

President Assad told AFP “…one cause for migration is the almost five-year-old embargo against the Syrian people, naturally my, and every Syrian official’s first task is to fight terrorism essentially using Syrian capabilities, but also using our friends’ support in the fight against terrorism. That’s why I say the problem of Syrian refugees abroad, as well as the problem of hunger inside Syria, as you referred to it, is a problem caused by terrorism, Western policies, and the embargo imposed on the Syrian people.”

Not surprisingly, all major religious leaders in Syria from the Sunni Grand Mufti to various Christian leaders representing different sects have remained loyal to central forces. This isn’t surprising because prior to outside meddling in Syria this nation under President Assad had continued to take in refugees from Iraq and Palestine irrespective of faith. In other words, prior to Gulf and NATO meddling the land of Syria openly welcomed Christians, Sunni Muslims and Shia Muslims fleeing the failed state of Iraq – after Western nations led by America destabilized this nation.

The Russian Federation is now supporting Syria to a much greater extent because political elites in this nation fear another Libya and Iraq. This reality is altering the military battle on the ground because now Syrian government forces are making headway. However, until Qatar, Turkey, and Saudi Arabia stop supporting various sectarian Takfiri forces then the crisis will continue. Therefore, it is essential for non-ISIS forces to be defeated or for them to melt away once nations that sponsor terrorism desist from this barbaric policy. If this reality emerges, then Syrian government forces can focus on crushing ISIS and restoring central power over the nation state.

Overall, if the international community seeks to curtail the international refugee crisis and crush ISIS – and other brutal Takfiri forces throughout the region – then it is imperative for peace to be restored to Syria. In other words, all positive roads run through Damascus and not the usual nations that destabilize time after time.