Japanese Art and Yumeji Takehisa: No International Salvation in Death

In all nations, you have elites which control and often abuse power based on “special interests” and “secrecy.” Many individuals feel like “fodder” because so many dreams never materialize for the majority of people. This is the reality of life because justice is but a word and democracy without economic freedom is shallow. Likewise, the daily grind of paying taxes to governments which abuse the system based on various agendas is not only frustrating, it also destroys the spirit of many.

However, for individuals blessed with so much talent then these internal convulsions can unbalance and destroy artists because of the countless “false dawns.” Vincent Van Gogh and Paul Gauguin are prime examples. They both were blessed with so much talent but the system crushed them and made life extremely uncomfortable. Therefore, in time capitalists got rich on the labor of two individuals blighted by poverty and extreme dark moments. 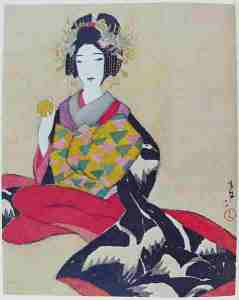 Paul Gauguin stated, “without art, there is no salvation” but even in death the “salvation” is mixed for this individual. Likewise, for Yumeji Takehisa even in death you still don’t have any real “salvation” when it applies to international recognition. However, death provided “salvation” for Vincent Van Gogh in its entirety when it applies to international esteem. For Paul Gauguin who was extremely sophisticated, this would have been enough but he remains blighted by aspects of his life that seem to linger when it is often forgotten when related to others.

Yumeji Takehisa died at the age of 49 in 1934 and clearly “the beautiful flower within” was gradually crushed during the final decade of his life on this earth. Likewise, his visit to America and Europe in 1931 didn’t deliver the results that he had hoped for. Indeed, if anything, it confirmed to him that he was “running against the grain” because his artist skills went unrewarded. Therefore, the international recognition that he craved for went unrewarded internationally despite being recognized by lay people in Japan.

On his return to Japan in 1933, he would soon enter a sanatorium because of ill health. The following year he would die in a sanatorium at the age of 49 and one can only imagine the helplessness and frustration that he felt. After all, even when Yumeji Takehisa gave everything to “open the eyes of the art world” he was still rejected. This was the same rejection within academia in Japan despite being popular with art lovers in this country. Not only was his determination in vain but to make matters worse his health deteriorated. This all happened while Yumeji Takehisa was trying to enlighten people within the international community.

Yumeji Takehisa had rebuilt so much after the 1923 Kanto earthquake which destroyed so much of his artwork. However, he bore this with great fortitude because he knew that vast numbers of people had lost so much more because so many people were killed by this tragic event. Indeed, Yumeji Takehisa was a prolific artist because he produced more than 3,000 pieces of art. Also, the poetic nature of Yumeji Takehisa meant that he was blessed with great innovation. 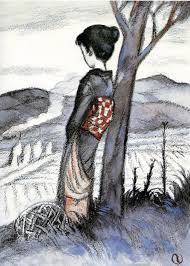 Sabine Schenk (Cultural News) states about his lack of recognition (Cultural News) that “The reason for this is that he didn’t fit the academic definition of fine arts during his active period from the 1900s to the 1930s, and that his work is not restricted to visual arts only, but ranges from painting, through all kinds of commercial arts, to poetry.”

Sabine Schenk further comments that “It is not easy to categorize him and outside of Japan he has not been recognized as part of the history of fine arts and, therefore, has not been the subject of detailed research, yet.”

Therefore, despite knowing artists of esteem in Japan during his lifetime and being popular outside of academia in the land of the rising sun, it is clear that his desire failed within the academic world and internationally. Even today you can’t find a great deal of research about Yumeji Takehisa and his name doesn’t ring a bell for the vast majority of art lovers internationally. Therefore, even in death “there is no salvation” for Yumeji Takehisa despite producing many stunning pieces of art. In time, it appears that apart from art lovers within Japan that his art will “not even become a shadow.”

Some Japanese art and cultural articles are republished by Modern Tokyo Times in order to highlight the unique traits of this nation to our growing international readership.