Totoya Hokkei (1780-1850) was born during the Edo Period and while he passed away well before the Meiji Restoration of 1868, it is clear that Western art was increasingly encroaching during the later period of his lifetime. Of course, many powerful impressionist artists equally adored certain aspects of Japanese art. Therefore, Hokkei witnessed many changes during his lifetime.

Initially, Hokkei was a fishmonger, but the lore of art and being blessed with amazing artistic skills meant that a new direction was in the offing for this fascinating artist. Indeed, his ability meant that he studied under potent individuals including Kano Yosen and Hokusai. Internationally, Hokusai is one of the most famous artists to emerge from the land of the rising sun. Yet, Yosen equally imbued new concepts and ideas into the intriguing mind of Hokkei – in time, Hokusai would further enlighten Hokkei. 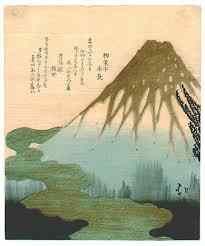 Despite this, Hokkei had an adorable independent artistic spirit and this led him to fuse many areas of art. Likewise, Hokkei had no intention of merely following in the footsteps of esteemed artists. Hence, he developed and fused what hit a chord with his own individual style, while focusing on the economic side based on an earnest reality. Therefore, Hokkei commissioned woodblock prints for wealthy people and focused extensively on illustrations for books.

I state in another art piece, “The work of Hokkei is based on adorable simplicity that fuses his own individualism and influences from other artists including Hokusai and Hishikawa Moronobu. In other words, the modern themes of the floating world to more traditional ukiyo-e artists both impacted on Hokkei. This reality illuminates the lightness of this intriguing artist.”

Naturally, Hokkei witnessed political convulsions during the later part of his life and new realities that would soon impact on Japan in his final years. Yet, alternatively, from an artistic point of view, more Japanese artists began to witness the growing shadows of Western art. At the same time, social and political ideas were not static despite the longevity of the Edo Period – and this notably applies to the nineteenth century and before the ending of this period of Japanese history. Therefore, Hokkei, from a distant initial career path, ultimately created adorable art and stunning illustrations.