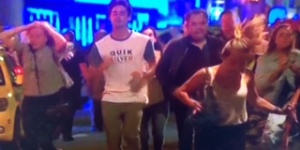 Sunni Islamist terrorists have killed at least 7 people in London, following on from the recent terrorist attack in Manchester. At the moment, information remains sketchy, but it appears once more that at least one of the three terrorists was known to security services. It may turn out that the other two were equally known, either way, knowing that at least one was known should raise serious questions. After all, similar barbaric Sunni Islamist attacks in other European nations have happened despite the terrorist assailants being known to security services.

One eyewitness told the BBC, “They were running up shouting, ‘This is for Allah.’ They stabbed this girl maybe 10 times, 15 times. She was going, ‘Help me, help me.’”

The latest terrorist attack by Sunni Islamists brings the total to three attacks in three months in the United Kingdom (UK). In other words, the UK now resembles the pattern that happened in France and blights other nations in Europe; for example, terrorist attacks in Belgium, Germany, the Russian Federation, and Sweden.

In Manchester, 22 people were recently butchered in a bomb attack aimed at killing young people. Hence, different tactics are being used to bring death and carnage to the streets of the UK and this is being done in the name of Sunni Islamism.

Of course, nations including Afghanistan, Cameroon, Egypt, Lebanon, Libya, Iraq, Mali, Niger, Nigeria, Pakistan, Somalia, Syria, Tunisia, and other nations, have all witnessed Sunni Islamist terrorism. Indeed, for nations like Afghanistan, Egypt, Iraq, Nigeria, Pakistan, and Syria, it is a regular occurrence. Therefore, in Egypt, the indigenous Coptic Christians face the Sunni Islamist sword, while in other nations the Shia are butchered in vast numbers by Sunni Islamists. Similarly, in Iraq, the entire Yazidi population faces being enslaved, killed, or driven out from their own land by ISIS (Islamic State – IS).

It is clear that Sunni Islamism is a growing threat to several European nations based on various factors. At the same time, it rings hollow when the media spins out this being a minor fringe reality because too many nations are suffering – and untold numbers of Sunni Islamists are being monitored from Egypt to the United Kingdom. Indeed, in Saudi Arabia, all non-Muslim holy places are banned and apostates face prison or death based on Islamic Sharia law. Therefore, in some nations apartheid religious legal systems and the state apparatus are openly persecuting non-Muslims and this is followed by Gulf petrodollars spreading hatred far and wide.