Chinese and Indian Competition in Space Heats Up 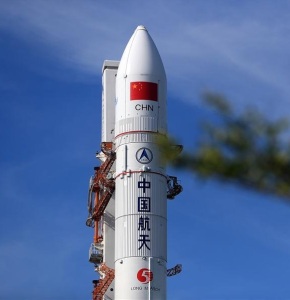 On May 5, India began a new diplomatic push in South Asia by launching the “South Asia satellite” into space. Built and launched by the government-run Indian Space Research Organization (ISRO), the satellite will provide communications and meteorological data to India’s South Asian neighbors (Economic Times, May 5 and Xinhua, May 5). [1] The satellite is an attempt to not only strengthen India’s ties with its smaller neighbors and promote India-led regional co-operation but also to contain mounting Chinese influence in the region and countering its space co-operation with these countries.

China’s influence in Sri Lanka has grown due to robust bilateral economic and defense ties (China Brief, May 15, 2015). Space collaboration has taken this co-operation to a higher level. In 2012, China put a commercial satellite into space for Sri Lanka (The Island, November 21, 2012). It is extending its Beidou Navigation Satellite (BDS) System to Sri Lanka and is setting up at least ten Continuously Operating Reference Stations there for this purpose (China Daily, April 1). Having drawn Sri Lanka into its orbit, China is attempting to build additional space partnerships with Afghanistan, Nepal and the Maldives—much to Delhi’s alarm (The Hindu, March 21, 2013). In response, India has turned to space diplomacy to court neighbors and allies in East Asia. In Vietnam, India set up a dual civilian- and military- use satellite tracking and imaging center (India Today, January 25, 2016).

At the height of the Cold War the United States and the Soviet Union used money and weapons to build satellite states; today China and India are using satellites in space to win influence and secure their geo-political and economic interests. They see each other as competition in the global satellite launch business. So how do the Indian and Chinese space programs compare? In which areas is competition likely to be most intense?

China’s space program began in the late 1950s and predates India’s by at least a decade. Unlike India’s space program, which was driven by development applications of space technology, China’s program originated in military objectives. In 1993, the China National Space Administration (CNSA) was set up to coordinate the country’s space activities.

India’s space program had a humble beginning and continues to operate with very limited resources—the Organization for Economic and Social Development (OECD) estimates that India’s annual space budget in 2013 was roughly $1.2 billion compared to China’s $6.1 billion and the US’ $39.3 billion (World Economic Forum, Jan 11, 2016; Rediff, November 20, 2003).

Both programs benefited from co-operation with the Soviet Union and later the Russian Federation. While such co-operation in the case of China was interrupted following the Sino-Soviet split in 1960, India’s co-operation with Moscow has remained strong. Many of India’s early milestones in space exploration were reached with Soviet help. A Soviet Cosmos-3M vehicle launched India’s first satellite, Aryabhata, in 1975 and the first Indian to fly into space did so onboard a Soviet spacecraft in 1984.

Although China’s space program is decades behind that of NASA, it is catching up. It has made “definitive progress,” toward becoming “a major space power globally” (Institute for Defense Studies & Analyses (IDSA), January 6). Its first major milestone came in 1999 with the launch of Shenzhou-1, an unmanned craft. In 2003, when the first Chinese taikonaut entered space, China became the third country in the world to achieve this feat. China has since launched six manned space missions. In 2007, it shot down its own defunct weather satellite, displaying an anti-satellite (ASAT) capability. In 2011, CNSA launched a space lab, Tiangong-1, and followed that up with two robotic and two manned dockings with it. It made its first soft landing on the moon in December 2014. Although CNSA reportedly lost control over Tiangong-1 in 2016, it was able to launch another space station, the Tiangong-2, a few months later. In April 2017, China launched its first unmanned cargo spacecraft.

China’s fourth White Paper on its space activities, which was released in December 2016, provides a glimpse of its space agenda for the coming years. It plans to land a rover on the far side of the moon in 2018, which will be a global first, and an orbiter, a lander and rover on Mars by 2020. [2] Should its Mars mission succeed, China would be the second country after the US to accomplish this feat. It plans to operationalize its permanent space station by 2022, around when the ISS is due to retire (Xinhua, June 8). However, the recent failed launch of a satellite by China’s Long March-5 rocket could delay some of these plans (Times of India, July 5).

As for India’s space program, although it has been building satellites and launch vehicles since the 1970s, it was only with its successful mission to the Moon in 2008 that its space activities caught the world’s attention. ‘Chandrayaan-1’s’ landing on the moon made ISRO the fifth space agency in the world to land a spacecraft on the lunar surface. Then in 2014, ISRO’s ‘Mangalyaan’ entered Mars’ orbit, making it the fourth space agency to enter the Martian orbit, the first Asian agency to achieve this feat and the only one in the world to do so on its first attempt. In addition to being technology demonstrators, ISRO’s Moon and Mars missions showcased Indian space successes on a limited budget (Business Line, September 29, 2014). India has some high profile deep space missions planned, including a return to the Moon in 2018 and landing a rover on Mars by 2021–22.

China’s space program is ambitious and “advancing on a broad front,” says noted Indian space analyst Ajey Lele. [3] Indeed, CNSA is making progress in a wide range of space activities including manned space flights, building and operating a space station, space science and planetary exploration. In contrast, ISRO’s “focus is narrow. Space science, for instance, is not a priority for it,” an ISRO official said. [4] CNSA’s budget for space science is around $110 million compared with India’s $43 million (Live Mint, November 29, 2016).

India also trails China in developing indigenous navigation satellite systems. China’s Beidou system, which has been in use in China since 2000 and operational in the Asia Pacific region since December 2012, will be fully functional at the global level by 2020. China plans to provide basic services to countries that are part of its Belt and Road Initiative by 2018. Of the proposed 35 satellites for global navigation services, it has already put 23 in orbit (China Daily, May 24). India’s Navigation Indian Constellation (NavIC) is “far less ambitious” than Beidou. It comprises just seven satellites and is only a regional system; coverage extends to about 1,500 km from the Indian landmass. It is expected to become fully operational soon. [5] Given Beidou’s expansion to cover all BRI countries and several South Asian countries as part of the initiative, NAVIC may not draw many customers in the region. As with the space diplomacy contest, this round of the satellite navigation competition appears to have gone in China’s favor.

India and China account for just 0.6 percent and 3 percent respectively of the $6 billion global satellite launch services market, which is dominated by NASA and the European Space Agency (The Hindu, February 16). Indian space analyst Kartik Bommakanti notes that China has “superior space launch vehicle capabilities; it has bigger and more powerful rockets, and more satellite tracking stations and launch stations” than India. [6] This has contributed to CNSA’s large and growing number of orbital launch missions. In 2016, China conducted 21 successful launches compared to NASA’s 22 and ISRO’s 7 (Space Flight 101, December 31, 2016). It plans to carry out 30 launches this year (Global Times, January 3).

Despite China’s superior launch capabilities, Indian space analysts are optimistic. Bommakanti also notes that “In due course, India will be able to match the Chinese in launch vehicle capabilities, particularly with advances in the GSLV (Geosynchronous Satellite Launch Vehicle) program and the reusable launch vehicle program”. As for the satellite segment, “Indian capabilities do match even exceed Chinese strength in terms of the quality of technology, if not the quantity of satellites.” [7]

India’s big advantage in the satellite launch business is “its reliable and cost-efficient launches especially for launching small satellites in the low earth orbit.” [8] ISRO’s record-breaking launch of 104 satellites in a single mission in February could bring down further the cost of launches (Hindustan Times, February 15). Its successful launch in June of the GSLV-Mk3, which has the capacity to carry 4 tons to the Geosynchronous Transfer Orbit (GTO), is expected to open up markets for the launch of heavier satellites (Live Mint, June 15).

India’s cost-effective space program has rattled China. Chinese space industry officials described ISRO’s record-breaking satellite launch in February as “a wake-up call” for China. China would need to “reduce the cost of putting satellites into orbit” to expand its market share and had lessons to learn from India, they said (Global Times, February 20). Beijing is now expected “to fast-track the commercialization” of its satellite launches (Global Times, February 19).

Inefficiency in the state-run CNSA is said to have made its program among “the most expensive in the world.” Privatization is expected to halve the cost of a Chinese satellite launch in the short-term and reduce it to a tenth in the long-run. This would make China “very competitive” in the global market (South China Morning Post, May 20, 2016). If CNSA’s attempts to reduce costs are successful, Sino-Indian competition for share of the global space launch market, especially for small and microsatellites will increase dramatically. This competition extends beyond diplomacy and economic competition—India and China both recognize the importance of space dominance to military competition.

India and China are competing for markets, resources and influence on land and sea, especially in Asia, Africa and the Indian Ocean. This competition is spilling over into outer space. China’s space program is more advanced and extends over a larger range of activities than India’s more focused program. China’s better-funded space program is likely to keep it ahead in the Sino-Indian race in and over space. In the short term, Sino-Indian competition can be expected to deepen in the commercial satellite launch business. This competition is likely to intensify as more private players enter the space sectors of the two countries. Although India’s focus on the military applications of space is certain to grow in the coming years, much will depend on its space collaboration with the U.S.  Meaningful transfer of technology from the US to India would give the latter’s military space program a strong boost but this could prompt China to accelerate its own military program further.

Dr. Sudha Ramachandran is an independent researcher and journalist based in Bangalore, India. She has written extensively on South Asian peace and conflict, political and security issues.