Japanese Art: Bridge in the Rain by Van Gogh based on the Altered Reality of Hiroshige 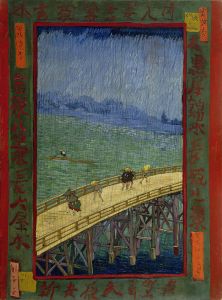 The Japanese artist, Ando Hiroshige (1797-1858), is one of the most esteemed ukiyo-e artists to hail from the land of the rising sun. Internationally, Hiroshige inspired many Western artists including Vincent van Gogh (1853-1890). Therefore, several art pieces by Van Gogh that allude to Hiroshige are extremely illuminating and this further highlights the international appeal of this sublime Japanese artist. 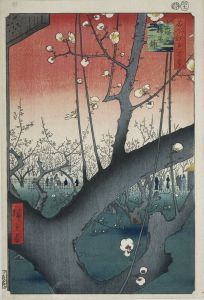 Bridge in the Rain by Van Gogh (top art image) fuses the original by Hiroshige with the natural traits of this impeccable European artist. Also, it is further evidence of the impact of ukiyo-e on the mindset of Van Gogh. Of course, subtle differences abound, for example, Van Gogh uses a different color scheme, embeds the power of nature, and other important areas including texture. Despite this, it is abundantly clear that Van Gogh is paying deep respect towards Hiroshige. 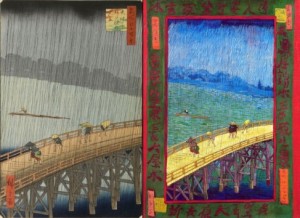 In the past, I state, “Visibly, the original by Hiroshige is titled Sudden Shower Over Shin-Ohashi Bridge and Atake appears more tranquil. Yes, it is clear that in both respective art pieces the weather is extremely negative based on rain and a swirling wind. However, despite this, the art produced by Hiroshige is gentler because of the color scheme of the backdrop and landscape.  Therefore, just like Buddhism and Shintoism became to share a similar space within the land of the rising sun, irrespective if certain historical periods favored one faith over the other, it could equally be said that the fusion of nature and humans is interacting more in tandem despite the harsh weather conditions in the art piece by Hiroshige.” 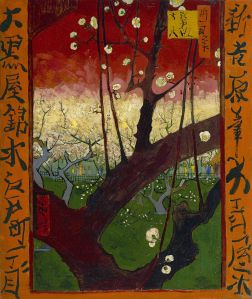 The Van Gogh Museum expresses eloquently, “Bridge in the Rain is a painted copy of a woodcut by the Japanese artist Utagawa Hiroshige. All the same, the work has a style of its own. Rather than attempting to imitate the smooth surface of the paper print, Van Gogh used conspicuous brushstrokes. He rendered the water with visible touches, the texture of which clearly reveals that this is paint on canvas. He also chose brighter colors than those in his example.”

Overall, the art piece titled Bridge in the Rain by Van Gogh elevates his esteem towards Hiroshige and Japanese ukiyo-e in general. It is further evidence that European artists in the later part of the nineteenth century finally woke-up to the intriguing art form of Japanese ukiyo-e. Hence, one can only imagine the excitement felt by Van Gogh when he first came into contact with the work of Hiroshige and other Japanese artists.