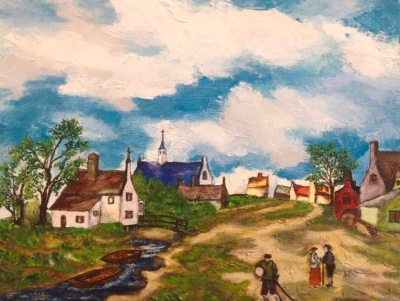 Another stunning art piece by the Japanese artist, Sawako Utsumi, is illuminated by the unique angle and a delightful color scheme to the original done by Esaias van de Velde. In the past, the same artist who hails from Northern Japan similarly focused on two other art pieces by the same Dutch artist. Therefore, despite Esaias (1587-1630) being born many centuries before and coming from a completely different culture, the contemporary Japanese artist is still fascinated by his rich legacy.

Equally important, in comparison with the original art piece that inspired Utsumi, she focuses on a Christian theme. Hence, the delightful backdrop to the more central Christian church in blue and white is extremely intriguing. 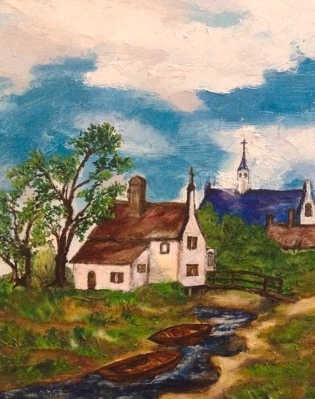 Ironically, at a similar time in history when Christians would feel the full pressure of the Edo Period in Japan in the seventeenth century, Esaias’s Flemish father also fled because of being a Protestant during a long period of sectarianism in parts of Europe. This fact – and the unique angle by Utsumi – is a way of saying that just like this faith survived despite religious persecution, the spirit of Esaias remains in modern times for individuals who adore Dutch art. 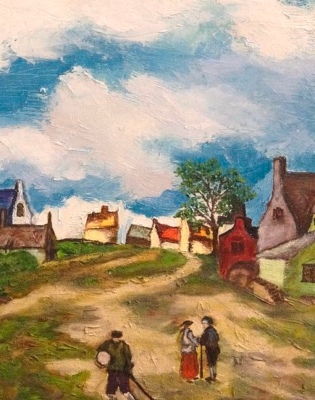 In a past article, I state, “It is known that Esaias admired Pieter Bruegel the Elder (1525-1569). Intriguingly, this artist was called “Peasant Bruegel.” For Utsumi, the artist Bruegel is also deeply admired because of his depiction of adorable landscapes and artistic themes that focus on peasants. In a sense, Utsumi is trying to fuse both artists within her art based on several angles.”

In truth, the latest art piece based on the richness of Esaias is extremely delightful and reaches the heart. This notably applies to the color scheme, the simplicity of the boats, the Christian churches that symbolize continuity, the background of natural energy despite the remoteness of the village, and other amazing angles.