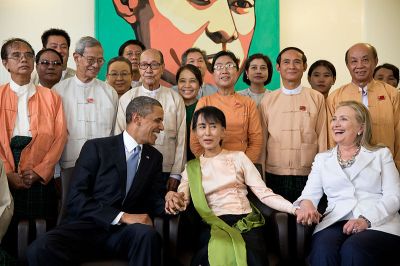 The situation in Myanmar remains critical in 2018 because ethnic, religious, and political issues are extremely complex despite many positive regional measures. On top of this, it is notable that certain militias and terrorist groups are utilizing border areas between Bangladesh and Myanmar, and China and Myanmar respectively. Equally problematic, narcotics are awash in various parts of the country and the legacy of military rule speaks for itself. Hence, Aung San Suu Kyi’s long-term objective of restoring ethnic and religious peace is extremely difficult, to say the least. However, she remains firmly committed to altering the dynamics of Myanmar in a positive direction.

Sadly for Myanmar, powerful international media outlets in the West and Sunni Islamic world are overtly manipulating one issue to suit a simplistic agenda aimed at playing the “Muslim victim card.” This applies to the “Muslim question” in Rakhine State and the citizenship rights of Bengali Muslims who are not indigenous to this nation. Yet, little is reported about the treatment of Buddhists in parts of Rakhine, nor the cleansing and Muslim internal migration policy of Bangladesh in the Chittagong Hill Tracts. After all, for decades you have had vast crimes against the indigenous Buddhists and other tribal minorities in the Chittagong Hill Tracts and Rakhine. Similarly, in Southern Thailand, many Buddhists have fled after Islamists beheaded Buddhist priests and intimidated Buddhist villagers. Not surprisingly, a biased Western and Sunni Islamic press campaign disillusioned some Buddhist priests in Myanmar – and the same applies to regional events that are underreported when Buddhists are the main victims.

Indeed, in the last few decades in Myanmar, more Christians have been killed than any other non-Buddhist faith group but this doesn’t suit the “Muslim card” agenda that is being played out in the media. In other words, this doesn’t suit the same forces that destabilized Iraq, Libya, Syria, and the former Yugoslavia based on a simplistic approach – and then took Kosovo from Serbia by force. Therefore, Myanmar needs to counteract the intrigues against this nation and to highlight the hypocrisy of a media circus that is negating important areas.

Aung San Suu Kyi is firmly aware that certain forces within Myanmar seek to prevent reconciliation between various ethnic and religious groups. Likewise, this astute political leader knows that militias in border areas are receiving covert support. On top of this, regional nations like Malaysia – yes, the same Malaysia that persecutes the Shia population based on Sunni Muslim power mechanisms – needs to be rebuked for fueling religious passions

Another major concern in recent years is the tense border areas between China and Myanmar. Hence, fighting can erupt at any time in this region between the Myanmar National Democratic Alliance Army (MDNAA) and central forces. Reuters says, “MNDAA is part of the Northern Alliance, a coalition of rebel groups comprising one of Myanmar’s most powerful militias, the Kachin Independence Army, and two smaller groups that have been in a stand-off with Myanmar’s military since clashes in Kokang two years ago.”

Overall, Aung San Suu Kyi and political leaders who seek to restore order in Myanmar need international support from an array of different nations. Japan, for example, should provide even greater economic, infrastructural, technological, and political support to the government of this nation. Similarly, China and the Russian Federation need to support Myanmar against any intrigues by the United Nations. In other words, it is essential to recognize the complex reality facing Aung San Suu Kyi because her obstacles are extremely difficult. Therefore, international assistance is essential in the ongoing fight to restore fresh hope after decades of military rule and the anti-Buddhist media angle needs to be firmly rejected.