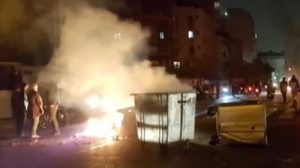 Protests in Iran are often sporadic and vary in size but they are a reminder that the political and religious elites are alienating many Iranians.  Of course, the disenchantment of protestors is based on multiple factors. For example, political corruption within the body politic of Iran, clericalism, poverty, squandering money on foreign intrigues, high unemployment, and other important factors. Therefore, tensions remain within Iranian society despite government and clerical threats against protestors.

Increasingly, chants are aimed at Ayatollah Ali Khamenei who is seen to be out of touch with the needs of ordinary Iranian nationals. Indeed, with many elite Iranian clerics being obsessed with Israel and interfering in several parts of the region, then it appears that the alienated and disadvantaged inside Iran have been abandoned.

Reuters reports, “Protesters also expressed anger over costly interventions in Syria and Iraq, where Iran is engaged in a proxy war for influence against regional rival Saudi Arabia.”

The above is clearly evident in Mashhad because demonstrators chanted, “Not Gaza, not Lebanon, my life for Iran.”

In late 2017 – and continuing in 2018 – several videos have circulated on social media whereby chants can be heard declaring, “Down with the dictator…Khamenei, shame on you, leave the country alone!”

The BBC reported last year, “The protests began in the north-east as an outcry against economic hardship and rising prices, but turned political in many places, with slogans chanted against Supreme Leader Ayatollah Ali Khamenei, Mr Rouhani and Iran’s interventionist foreign policy in the region.”

If so, irrespective if demonstrations grow in late 2018 or fade away in 2019, the disenchantment will remain within the hearts of many Iranians. Therefore, if the political and clerical status quo is backed by a government heavy-handed crackdown, then future demonstrations may become even larger and better prepared.