The poetry of Yamanoue no Okura (660-733?): Morals of Buddhism and Confucianism in old Japan

The poetry of Yamanoue no Okura (660-733?): Morals of Buddhism and Confucianism in old Japan 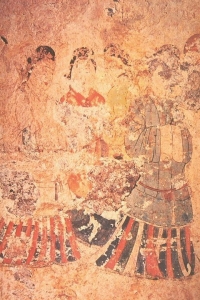 The early life of Yamanoue no Okura (660-733?) remains shrouded in mystery. Hence, speculation of his birth, be it Paekche in Korea or in Japan is open to debate. Irrespective of this, it is clear that Okura served Japan and he deemed himself to be a loyal native of the land of the rising sun.

Indeed, Okura visited Tang China after being chosen in the early eighth century and he returned roughly six years later in 707. Okura’s time in Tang China will have furthered his love of Buddhism and Confucianism.

The poetry of Okura highlights a deep thinker who understood the horrors of this world. Of course, some of his negative thinking will have been based on his idealism of Buddhism and Confucianism. Therefore, Okura was saddened by much of the world he knew.

It is often said that Okura was unique for his time because of the Confucian slant to his poetry. Interestingly, the fusions of Buddhism and Confucianism also witnessed the fusions and impact of Chinese literature and the expansive Japanese poetry that was growing during his lifetime. This fusion also led to complexity within his poetry because the morality of Confucianism to certain aspects of resignation related to Buddhism created a complex reality.

This world of ours
Is full of horror and shame
I feel yet
I cannot fly from it
For I am not a bird.

Hence, this short poem says much about how many people feel today. Also, it highlights the freeness that Okura had despite serving people from the upper echelons of Japanese society.

In his poem that is focused on the poor and destitute, it is clear that Okura is deeply concerned about the important issues of his day. One part of this poem says:

A poor man,
With mother and father
Starving and numb,
Wife and children
Begging weeping;
At such a time
What is he to do?
As he passes through the world.
Heaven and earth,
Are wide, they say, yet
For me
Are they not cramped?

Overall, the mystery of the early life of Okura should neither serve the nationalist or multi-cultural brigade that seeks to re-write history. The only issue is the sublime poetry he wrote and the uniqueness of the Confucius slant that was very important to Okura. Likewise, the differences between Buddhism and Confucianism meant that his questions and reasoning were extremely complex. Therefore, his world was fully based on serving Japan and important regional dignitaries, along with being fully focused on the world of Japan and Tang China that meant so much to Okura – and, of course, this especially applies to Japan.