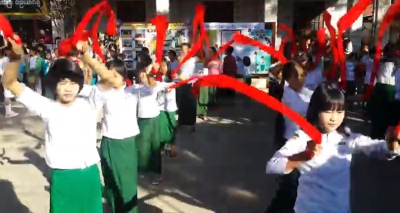 The European Union (EU) will assist Myanmar in the education sector to the tune of US$252 million dollars. This news is widely appreciated because State Counsellor Aung San Suu Kyi is intent on increasing the living standards of the people of Myanmar. Hence, it is essential that the next working generation is given the chance to flourish and the same applies to the generation that will follow.

Indeed, Aung San Suu Kyi recently stated, “We cannot leave the heavy burden of conflict on the shoulders of the younger generations.”

Therefore, while EU support isn’t directly related to the above comment, it still falls in line with the objections of Aung San Suu Kyi. This relates to focusing on ending many protracted conflicts, developing the infrastructure, safeguarding democracy based on past negative history, providing the younger generation with greater future options, and other important areas.

Dr. Myo Thein Gyi, the Minister of Education, stipulated, “The European Union’s EUR 221 million grant to the Ministry of Education has been provided as a sign of partnership and trust, and as a sign that the European Union shares our Government’s ambition to dramatically improve the education outcomes in Myanmar. Education is the best possible investment in our country’s democratic federal future. Since 2016, the Government has significantly increased budget allowance for the education sector every fiscal year. So, the EU support will also supplement the Government’s investment in education.”

Indeed, the above angle is very important to Myanmar because this nation wants to strengthen ties with nations throughout the world. Equally important, Myanmar wants to strengthen ties with important democratic nations and powerful blocks. After all, democracy needs a chance to succeed in Myanmar. Therefore, international support is needed to assist this transitional period that is blighted by internal and external factors.

Nations like Japan will welcome the educational approach of the EU because Prime Minister Shinzo Abe supports a different nuance to assisting Myanmar. In other words, Japan believes that economic development and support will assist progressive forces inside the nation. On top of this, Japan understands the virtues of Aung San Suu Kyi and politicians that seek a bright future for Myanmar.

Last year, the Japanese Ambassador to Myanmar, Ichiro Maruyama, stated, “We will try to help organizations like the UN and the international community understand the government’s voice, because only doing so can [gradually] bring positive outcomes… We believe so.”

Japan, according to Maruyama – and other voices in the corridors of power in Tokyo – Japan believes it is “…very important for Myanmar, which now has a democratically elected government after more than 50 years, to solve the issues it faces. We engage with Myanmar based on this belief.”

Kristian Schmidt, the EU Ambassador who moved to Myanmar in 2017, uttered, “The EU is very proud to be Myanmar’s partner in reforming and improving education. With knowledge and skills come hope, opportunities for a better life, open mindsets and the ability to take part in society and shape the future, we believe youth in Myanmar deserves better schools and training to free their potential.”

Ambassador Schmidt stated in 2017, “I applied to serve the European Union in Myanmar, because I sincerely believe Myanmar can achieve something extraordinary: the people of Myanmar made a democratic decision to escape decades of isolation and re-join the community of nations with dignity and self-confidence. Hard work is needed to overcome the challenges in becoming a modern, peaceful and prosperous democracy, and no-one else can do it for you. But I look forward to walking with you for the coming four years.”

Overall, Myanmar seeks to strengthen regional ties and to improve relations with Northeast Asian powers. Hence, China, Japan, and South Korea all seek to increase trade with Myanmar and to help in an array of important areas. Similarly, nations like Singapore continue to invest in Myanmar. However, Myanmar also seeks to strengthen ties internationally outside of Asia and this notably applies to the democratic world. After all, this nation seeks to strengthen democracy internally and to tackle important issues related to the constitution, business law and trade, the infrastructure, and ending protracted conflicts that are burdening the nation.