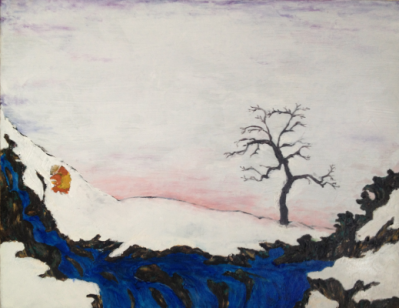 Sawako Utsumi fuses a stunning landscape with a wandering Buddhist monk in the bleak midwinter of Japan. Indeed, the religious angle, be it Buddhism, Christianity, or Shintoism, is a theme that pops up often in her art. However, her faith is embedded in the natural rites of Shintoism that isn’t dogmatic. 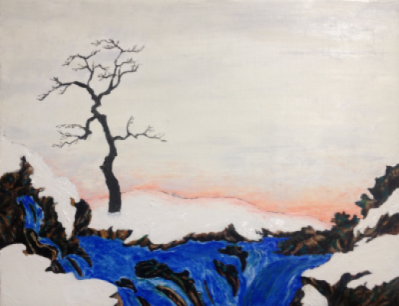 Yet, in the linkage art piece, the religious angle isn’t visual. Instead, people will focus on personal inner-thoughts related to nature. Of course, these inner-thoughts can expand because art shouldn’t be contained by narrowness.

In the first of the dual linkage, the single tree is on the left. Yet, in her new art piece, it is on the right. Also, instead of a pure landscape, you now have a lonely Buddhist monk in search of a distant Buddhist temple. However, despite the bleakness and the heavy snow, the Buddhist monk isn’t distracted by the harshness he faces. 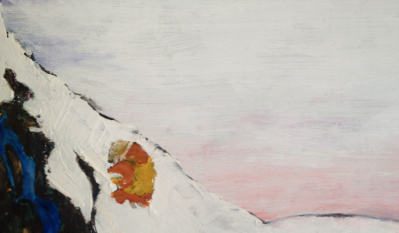 In the other linkage art piece, I wrote, “Of major difference to the influence of the artist Kiitsu is the winter setting, focusing on a traditionally based landscape. Equally, one tree instead of a plethora and being more spiritual. Thus, the passages of time are just like a butterfly but with the difference being the imagination that forms in this fleeting life.” 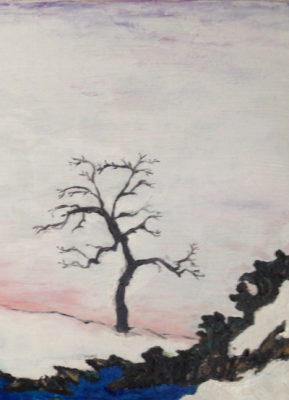 Hence, the two realities aren’t connecting, unlike the art piece that is connecting Buddhism and nature through the prism of her Shinto faith. Thus, without words nor connections, the bleakness of winter is a natural tree of life.

This is based on mystery, nature, and words that survive the passages of time despite many swords that cut off countless branches!