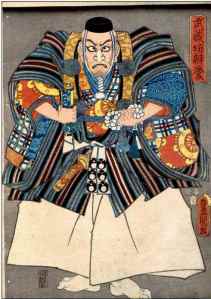 In Japanese culture, history and art it is clear that Saito no Musashibo Benkei left a lasting impression and this continues today in modern culture. This legendary warrior monk belonged to the intriguing period of the 12th century. He was born in 1155 and died in 1189 after serving the famous Minamoto no Yoshitsune.  The images in this article come from the esteemed toshidama (Toshidama Gallery), whereby you can feel the power of Benkei and visually understand how he was portrayed in Japanese art.

Benkei is famous within the folklore of Japan because of his enormous strength that was equally matched by great loyalty. In the realm of Japanese art and the intriguing ukiyo-e art movement, then Benkei provides a wealth of images by many famous artists.

It is noted that he was extremely tall because by the age of seventeen Benkei had reached two meters in height. This is still very tall by the standard of today. On top of this, Benkei was blessed with many great attributes that belong to his fighting skills and the knowledge he obtained. This knowledge was enhanced enormously based on his many travels to Buddhist monasteries.

Of course, within Japanese folklore and the mysteries of history and Shintoism then many intriguing stories evolve around Benkei. He firmly belongs to the power and prestige of Buddhism and the warrior class that emerged during this period of Japanese history. However, just like Judaism, Christianity and Islam have all been influenced by the Pagan culture where they developed; this similarly happened to Benkei. In other words, the power of Shintoism and indigenous folklore became fused within many elements of Japanese Buddhism. Therefore, these intriguing stories about Benkei have clearly survived the test of time because he remains a potent figure today in modern Japan.

Much depends on the Benkei that appeals to the storyteller. However, within Japanese art and the tradition of ukiyo-e, it is clear that the term Oniwaka became merged within the nature of this famous warrior monk. Oniwaka means the “demon or ogre child.” Of course, many other fascinating stories evolved around Benkei including his deeds on the battlefield. For example, it is stated that he defeated at least 200 military men during major battles throughout his life. This of course may be exaggerated, or it may not, yet the point is that his fame within the warrior class appealed greatly when judged with his great physical strength. On top of this, Benkei’s loyalty was second to none therefore given the cultural dynamics of Japan then he was blessed with an essential attribute.

It is also reported that Benkei in time became a yamabushi (mountain warrior monk) and for this reason he is often depicted in a cap. This fits in well with the yamabushi who had many fine qualities. After all, the yamabushi were mighty warriors who were blessed with respective supernatural powers. Equally important, was the ascetic nature of the yamabushi and the exemplary knowledge they held related to the Shugendo doctrine.

The Shugendo doctrine evolved around the fusions and integration of many powerful thought patterns. This applies to the school of Shingon Buddhism, the esoteric nature of this faith, rich heritage of Shintoism, the Tendai Buddhist faith and the great philosophy of Taoism. Therefore, the yamabushi were not just mysterious holy men who had mighty powers in the area of military strength – but equally important was the knowledge that each individual obtained in this world and how they utilized this with the mystery of nature.

His loyalty remains famous today and the Toshidama Gallery sums up Benkei extremely well when it comes to the loyalty of this esteemed individual. Toshidama reports: “…he was raised by monks who were both religious and military. As a young man he positioned himself at one end of Gojo Bridge and disarmed travelers of their swords. On reaching his 999th sword he fought with a young nobleman, Minamoto no Yoshitsune, who won the battle of the bridge and thereafter Benkei served as his principal retainer. They fought in the Gempei Wars between the Taira clan and their own Minamoto clan.”

If you are intrigued about Benkei then this article is providing just a snippet of the importance of this intriguing individual in relation to many aspects of Japanese culture, history and folklore.

Some important Japanese art and cultural articles by Modern Tokyo Times are republished on the need to inform our growing international readership about the unique reality of Japan.