The Meiji Period (1868-1912) was very dynamic in many ways because of new thinking, modernization, radical change, and a plethora of other factors, altered the cultural landscape in all major cities. However, the countryside often ticked to a different beat despite important reforms and major changes in the area of agriculture and amenities. In the field of ukiyo-e art, it appears that the crème de la crème of Meiji ukiyo-e artists have been relegated or not acknowledged fully. After all, the emphasis in the past was mainly focused on Edo ukiyo-e artists.

Despite this, it is clear that you have many important Meiji ukiyo-e artists who blessed this art form. This notably applies to Chikanobu, Kawanabe Kyosai, Ogata Gekko, Yoshitoshi, Toyohara Kunichika, Utagawa Yoshifuji, Mizuno Toshikata, Kobayashi Kiyochika, and Ginko Adachi. The list could be added and for some of the above artists then clearly they began their careers during the Edo period but on each above individual, the Meiji period impacted greatly on their art.

The Toshidama Gallery (http://www.toshidama-japanese-prints.com/) comments that “Whilst the date is significant, it is hard to say that prints produced before this date were ‘Edo’ and those made after were ‘Meiji’. There is however a clear trend in both subject matter, style and quality which becomes more apparent as the century progressed. Most striking is the use of colour. With progress came industrialisation and the ability to produce aniline dyes and commercial pigments. The distinctive reds, blues and violets of Meiji prints are hard to miss when compared to the vegetable and organic dyes of the early part of the century. Vibrant and sometimes harsh, only the great artists of the period such as Yoshitoshi and Kunichika were able to create subtlety or sophistication from the new colours. For an artist such as Kunichika, the new reds were the ‘colour of enlightenment’ and their use had political overtones as well as artistic purpose.”

Toshidama continues, “Subject matter for Meiji artists continued the tradition of picturing the still wildly popular kabuki theatre. In the case of artists such as Kunichika, the production of theatre prints still overwhelmingly made up the bulk of their commissions.  Historical subjects remained popular and often carried critical political undertones especially in the case of artists such as Yoshitoshi or Chikanobu who were sentimentally and politically attached to the previous administration. There was however, an increasing demand for picturing the new. In print series such as Yoshitora’s 53 Stations of the Tokaido Road of 1872, we see the use of telegraph poles as significant decorative devices – a sure reflection of the new era’s commitment to modernisation. Pictures of beautiful women had always been a staple of ukiyo-e production, but as in the case of Kunichika’s Mirror of the Flowering of Customs and Manners of 1878, these bijin pictures reflected the new western influences and stopped looking back to the dreamy floating world courtesans of Utamaro. Kunichika’s women are tougher, and have personalities and stories to tell and this is also the case in the work of Yoshitoshi, where women figure as identifiable characters for almost the first time in Japanese art.”

Obviously, the dynamics of the time would inspire new thinking and creativity and the new vibrant color palette enabled new dimensions to develop. Other areas like multiple perspectival lines and detailed composition meant that times were changing. Of course, it is important to avoid generalizations because ukiyo-e artists in both periods of history, or who belonged to both the Edo period and Meiji period, had certain trademarks which belonged to each individual artist. However, the impact of modernization and the threat to ukiyo-e because of this meant that new focuses were needed in order to survive the Meiji period.

The reputation of some Meiji ukiyo-e artists is starting to grow and long may this continue. In the history of ukiyo-e, the artists of the Meiji period had it hard because often the greats of the Edo period overshadowed them in popularity and international prestige. Also, unlike the ukiyo-e artists of the Edo period the changing world was challenging this art form because of multiple factors. Therefore, innovation was needed during the Meiji period because the power of photography was constantly growing and different art forms were gaining greater attention internally once Japan began to open up to the outside world.

Therefore, like I stated in an earlier article: “Yoshitoshi was working against the onset of modernity because with the mass production of Western standards, for example in lithography and photography – he was fighting a losing battle.  However, he did keep the bursting dam at bay but the spark of passion could not keep the onrushing water out.  Therefore, Japanese woodblock print, which had been a beacon for Japanese art, succumbed to the onset of modernity and him, and countless others must have felt the pain deeply.”

Yet despite everything the artwork of Chikanobu, Kawanabe Kyosai, Ogata Gekko, Yoshitoshi, Toyohara Kunichika, Utagawa Yoshifuji, Mizuno Toshikata, Ginko Adachi, Kobayashi Kiyochika, and other Meiji ukiyo-e artists, was truly amazing. Therefore, each individual mentioned left behind many stunning pieces of art and they all provide a glimpse into the changing times of this period. 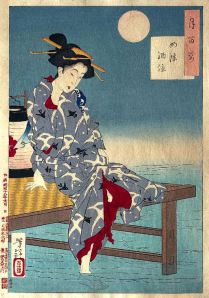 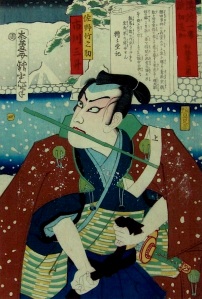 Some art and cultural articles by Modern Tokyo Times are republished in order to inform our growing international readership.