Shintoism inside the consciousness of Japanese culture: Art to ghost stories to solace

The endless winds of modernization and technological innovation is relentless in Japan. Hence, the religious dynamics of old Japan is but a ghost of its former self, just like the erosion of Christian influence in nations like the United Kingdom. However, despite the religious visibility of the old world still surviving to a much lesser degree based on religious Buddhist temples and Shinto shrines; the real power of the old world exists within the consciousness.

Of course, unlike Buddhism, Confucianism, Taoism, and other religious and philosophical forces that entered Japan, the faith of Shintoism is indigenous. In this sense, it is the consciousness of Shintoism that seeps through in the shadows of modernity, high-rise buildings, and endless technological innovations. 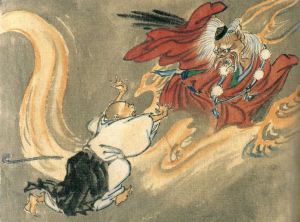 Therefore, despite Buddhism dominating in powerful religious parts of Japan associated with Kamakura, Koyasan, Kyoto, and a plethora of other parts of this land; it is Shintoism that remains inside the consciousness from a natural point of view. This applies to small little shrines that are a pale shadow of the past – this relates to the reduction in size or being mainly hidden by endless buildings in built-up areas. Of course, you still have major places where Shintoism is firmly visible based on holy shrines of major importance; yet, it is the small little shrines that pop-up in the least expected places in major cities and the countryside alike that inspires the spirit.

Not surprisingly, ghost stories and aspects of art depict mysterious areas related to Shintoism that have been fused within mythology and the rich tapestry of Japanese folklore. In saying this, the majority of art themes emanating inside the rich diversity of ukiyo-e remain outside the world of Shintoism. Despite this, certain areas of Japanese culture and the mysterious underworld within the broad spectrum of ukiyo-e do depict themes that relate to Shintoism.

The marginalization of Shintoism inside the modern religious reality of Japan is factually based on secularization. Yet, Shintoism remains within the soul on New Years Day for the majority of Japanese people; during festivals throughout the country; natural ceremonies for children related to age; and shrines that dot the landscape and mountainside irrespective if the shrine is small or for tourists to pay homage. Similarly, aspects of Shintoism exist in the world of anime to varying degrees, for example, the undertones to Spirited Away and the rich tapestry of Mononoke.

In a sense, Shintoism blends naturally based on the importance of nature and the freedom that exists in this faith because it isn’t based on religious dogma. Hence, the power and influence of Shintoism may be on the wane compared with the past; yet, inside the consciousness, this faith persists during times of hope and renewal. Therefore, the spirit of Japanese identity is still connected with a faith where homage may be more important than being over religious. Also, just like Shintoism existed in the world of art, culture, and mythology in old Japan; the new world of anime and other areas still prevails even if in the shadows.